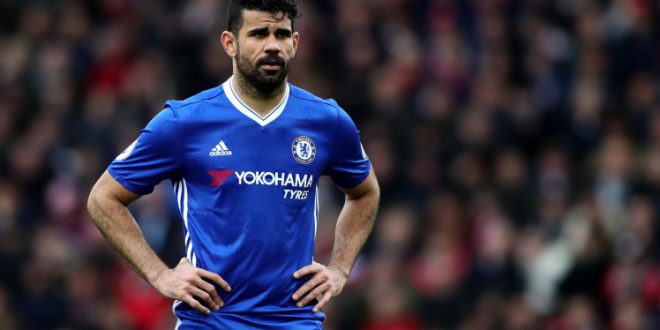 STOKE ON TRENT, ENGLAND - MARCH 18: Diego Costa of Chelsea looks on during the Premier League match between Stoke City and Chelsea at Bet365 Stadium on March 18, 2017 in Stoke on Trent, England. (Photo by Chris Brunskill Ltd/Getty Images)

‘Chelsea Has Treated Me Like A Criminal, If He Wants To Fine Me, Let Him Go Ahead!’- Diego Costa

Estranged Chelsea striker Diego Costa has accused the London club of treating him like a criminal after his falling out with manager Antonio Conte leading to him being frozen out of the club. Costa scored 20 Premier League goals as Chelsea won the EPL title last season but was told via a text message by Conte that he would no longer be needed at the club this season.

Conte ordered Costa to train with the reserves after he rejected a mega money move to China, rather opting for a transfer to his forner club Atletico Madrid- who can’t sign him until January due to their transfer ban by FIFA.

And now Costa, who has been holidaying in his native Brazil, has revealed that he doesn’t mind receivin fines from the club for refusing to train with the reserves, accusing Conte of treating him badly.

“I wouldn’t be allowed access to the first-team dressing room and I would have no contact at all with the guys,” he explained to SportsMail. “I’m not a criminal! I don’t think it is fair after all I have done to be treated like that.

“They gave me a week extra off [at the start of pre-season training] but since then it’s fines all the way.

“They want me training with the reserves. I am not going to do that. I am not a criminal and I am not in the wrong here. So, if they need to fine me, let them fine me.”

“I am open to being a year in Brazil without playing, even if Chelsea fine me for a year and don’t pay me,” he said.

“I’ll come back stronger. If I was in the wrong, I’d go back now and do as they say.

“I have rejected other offers. They want to sell me to China or other teams. If I’m off, I’m going to the club I want to go to – not the club that’s paying the most.”

“His ideas are very fixed and clear,” Costa said of Conte. “I have seen the sort of person he is. He has his own opinion and that will not change.

“I respect him as a great coach. He has done a good job and I can see that, but as a person, no. He is not a coach who is very close with his players. He is very distant. He doesn’t possess charisma.”

As for the infamous text message sent y Conte to Costa informing him of his plans, Costa says he won’t delete the message.

“There are ways of going about it. You don’t do it by text message. You should be honest and direct to someone’s face,” he added.