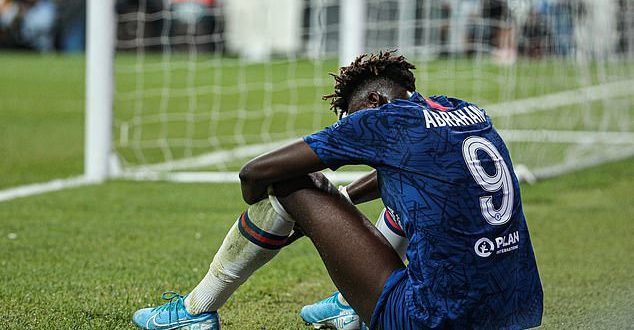 Abraham, 21 years of age, missed the decisive penalty in the shootout in Istanbul, with Liverpool goalkeeper Adrian saving the spot-kick with his legs.

And Kick It Out published a statement on Twitter on Thursday saying that the England youngster was racially abused on social media following the final whistle.

‘Such abuse is now increasingly predictable, but no less disgusting.

‘We send our support to Tammy and reiterate our call for Twitter and other social companies to clamp down on this level of abuse. This is a call to action – we want to know what they are going to do to tackle this insidious problem.’

Abraham is looking to make his mark in the Premier League this term as he tries to convince boss Frank Lampard he can lead the Blues attack in pursuit of a top four finish.

Having already been capped twice by England, he has started the season promisingly – showing a major threat at Manchester United before coming on the pitch as a sub on Wednesday to win a penalty kick in extra time.