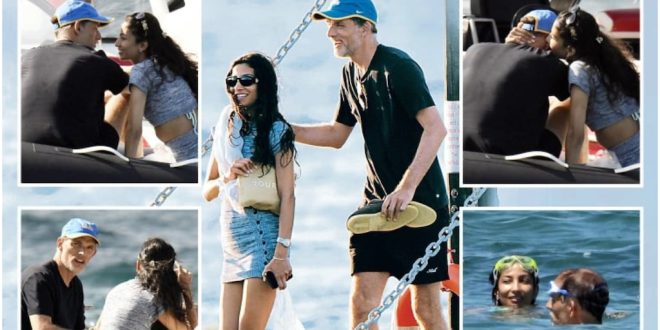 CHELSEA manager Thomas Tuchel has found love again with a glamorous Brazilian — days after his divorce was granted.

A holidaymaker said: “They held hands at every opportunity and looked really happy.”

Beaming Tuchel put a tender hand on his new girlfriend and laughed with her in the sea on the romantic break.

The German and Max enjoyed a sunset boat trip before he escorted her back to their £20,000-a-night private villa.

The Brazilian mum-of-two also swam with him in the Med off Sardinia.

One holidaymaker said: “They looked very much in love. At one stage Natalie ran her hand round the back of his neck and leaned in for a kiss.

“They went swimming, chilled on the beach, lunched in the hotel’s restaurant and got a boat to the island of Caprera.”

He had been on Chelsea’s pre-season tour of the US before flying to Sardinia with London-based Natalie.

She runs her own business and once featured on the Yummy Mummy UK website, where she was described as a “mum who rocks” and “a real inspiration”.

Tuchel and Sissi, 46, announced their 13-year marriage was over in April. A source said: “They tried to avoid splitting but in the end there was no other way.”

She petitioned for divorce on the grounds of irreconcilable differences and a decree nisi was approved last month, according to court documents.

Last Wednesday, in a written order, Mr Justice Mostyn said he was satisfied that Tuchel had behaved in such a way that Mrs Tuchel could not reasonably be expected to stay with him.

He was satisfied the marriage had broken down irretrievably.

The couple are believed to have reached a multi-million pound settlement ahead of a decree absolute, expected in the next six weeks.

The club was banned from selling tickets, signing players or giving new contracts to existing players. But Tuchel is on a more secure footing since US tycoon Todd Boehly paid £4.25bn for the Blues.