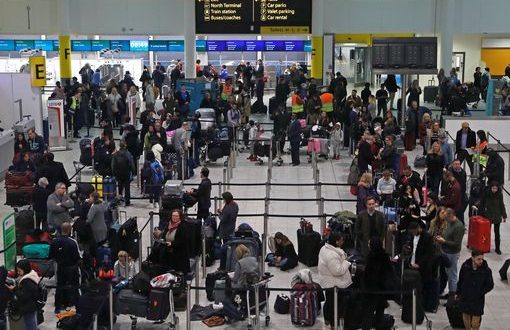 Thousands of passengers are in limbo with the runway at Gatwick remaining closed on Thursday morning after reports of drones flying close to the airport.

The seemingly deliberate nature of the disruption is likely to spark fears it is a coordinated attack on Britain’s second-busiest airport.

Flights in and out of the airport were suspended at about 9pm on Wednesday after two drones were sighted near the airfield.

Gatwick announced that the runway had reopened at about 3am on Thursday – but just 45 minutes later it was shut again.

The airport’s chief operating officer Chris Woodroofe admitted it could take days to recover services, warning those responsible they could face five years in jail.

He blasted the “irresponsible” act, telling BBC Radio 4’s Today that 10,000 people had been affected by the closure, including 2,000 whose flights had been unable to take off.

Mr Woodroofe said the situation would be re-assessed with a view to re-open at 8am, but at 7.40am, the airport said flights remained suspended “due to drone activity”. It was reported the re-opening time would be pushed back to midday.

Sussex Police described it as “a deliberate act to disrupt the airport”, but “there are absolutely no  indications to suggest this is terror related”. 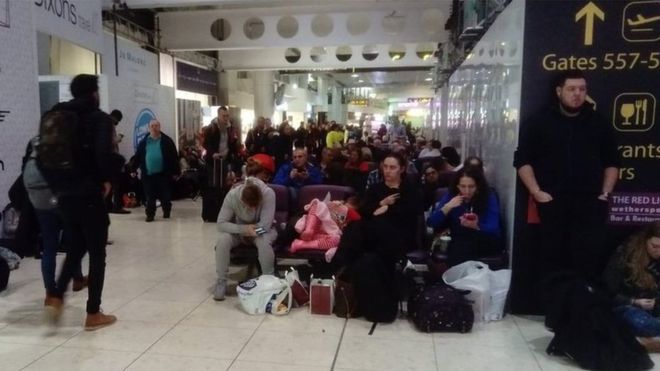 He said there were two drones which had been seen flying “over the perimeter fence and into where the runway operates from”.

Mr Woodroofe said: “They disappeared and reappeared over the night period from 9pm until 3am, at which point we reopened the runway.

“That lasted 45 minutes before the drones reappeared again and we are currently closed and it is our intention to review the situation when we have daylight at 8am.”

Mr Woodroofe added that the drones had sparked “very significant disruption for passengers” but that police did not want to shoot them down because of the risk from stray bullets.

He told Today: “Last night there were 10,000 people disrupted.

“There were 6,000 people flying in from around the world to Gatwick who were diverted to alternative airports as we closed, there were 2,000 people who didn’t take off from their origin airport and there are a further 2,000 people here who couldn’t fly to their destination because the airport closed.”

He added that 20 police units from two forces were hunting for the pilot, saying: “The police are looking for the operator and that is the way to disable to drone.

“We also have the helicopter up in the air but the police advice us that it would be dangerous to seek to shoot the drone down because of what may happen to the stray bullets.”

Passengers faced delays to their travels on Wednesday night as some flights were unable to leave the tarmac while others were diverted to alternative airports.

Some people reported being left stuck on planes for several hours while they waited to find out what was going on.

Gatwick advised anyone flying from the airport, or collecting someone, to check the status of their flight.

A spokeswoman added that airlines were working to provide affected passengers with hotel accommodation or transport for those whose flights were diverted.