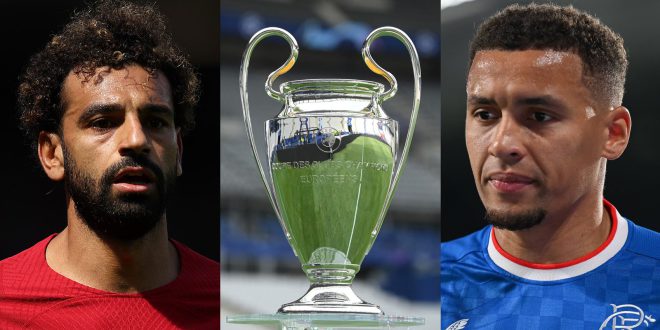 Liverpool and Rangers will meet in the Champions League group stage, while Manchester City’s Erling Haaland is set to face his old club Borussia Dortmund.

Eintracht Frankfurt, who are making their group stage debut, are in the same group as Tottenham.

Bayern Munich, Barcelona and Inter Milan have been drawn in the same group.

Matches will take place between 6 September and 2 November.

This season’s Champions League final will take place at the Ataturk Olympic Stadium in Istanbul, Turkey, on 10 June 2023.

Rangers are in the group stage for the first time in 12 years after overcoming PSV Eindhoven, and the Scottish club face two mouth-watering Group A games against six-time champions of Europe Liverpool.

Ajax and Napoli make up the rest of Group A.

As well as record 14-time winners Real Madrid, Celtic also face RB Leipzig and Ukraine’s Shakhtar Donetsk, who are playing their home games in Warsaw, Poland, because of Russia’s invasion of Ukraine, in Group F.

Tottenham will be confident of making progress after being drawn in the same group as Eintracht Frankfurt, last season’s Europa League winners, Sporting Lisbon and Marseille.

Although two-time winners Chelsea face two tough games against AC Milan, Thomas Tuchel’s side will hope to advance to the knockout stage in Group E which is also made up of RB Salzburg and Dinamo Zagreb.

Sevilla and FC Copenhagen also await Manchester City in Group G, while there are two heavyweight games between Paris St-Germain and Juventus in Group E.

But one of Bayern Munich, Barcelona and Inter Milan will miss out in Group C. The three club have been crowned champions of Europe 14 times between them..

Charles Igbinidu is a Public Relations practitioner in Lagos, Nigeria
@https://twitter.com/ionigeria
Previous Obasanjo, Obi Meet Wike In London
Next 2023: We Met Tinubu, Atiku, Obi But Consultation Not Over – Wike