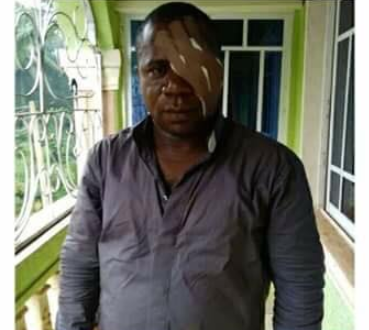 A Catholic Priest of Nsukka Diocese has been left with serious eye injury while another is in critical condition following an unwarranted and merciless beaten  received  from masquerades  and youths of Ogbodu-Aba in Udenu Local Government Area, Enugu State on Thursday 12 July, 2018.

It was gathered that as the two clergy men got to Ogbodu-Aba, they were stopped, blocked and shamefully harassed by some masquerades and the slightest attempt by the priests to inquire what was amiss were greeted with rains of lashes and massive downpour of slaps from every side.

The youths rounded them up and made it difficult for them to escape and pounced on them until the two priests sustained serious injuries.

The crowds that gathered as the incident was going on – did not even help the priests; instead they encouraged and hailed the youths to go on with their mischievous act.

According to reports, the two priests were eventually rescued by Mr. Stephen Eze and his wife who later was said to have been ostracized by the community members.

It was also gathered that Fr. Chikwado Udaya during the attack, sustained a lot of injuries some of which affected his vision. In fact, since the ugly incident occurred, he has not been able to see with one of his eyes. He has already undergone an eye operation but the situation is still bad. Fr. Akubue Daniel as at the time of filing this report is still receiving treatment.