Home / News / Local News / Why I Can’t Go And Greet Buhari, Even If Invited —Fayose 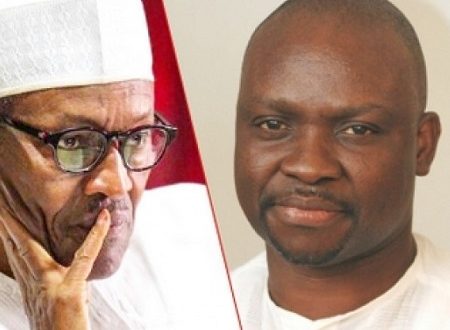 Why I Can’t Go And Greet Buhari, Even If Invited —Fayose

Governor Ayodele Fayose of Ekiti State, who seems the loudest opposition voice against President Mohammadu Buhari’s government, has said that his agitation and revelation about what had happened to the President while away in London, was responsible for the return of President Buhari on Saturday.

Fayose, who said this on Wednesday, when speaking to leaders of the Peoples’ Democratic Party (PDP) at the government office, said he stands by all his claims about the President being in coma on July 6.

He said he had no apology whatsoever for all he has said about the President.

Affirming this in a press release from his Chief Press Secretary, Mr Idowu Adelusi, the governor who reiterated his call for President Buhari’s resignation, said: “If not for our efforts Buhari wouldn’t have returned now. Buhari is sick and tired and even his physical appearance betrayed this and he needs to go home and rest.

“Today, they have cancelled the Federal Executive Council meeting. You cannot hide the truth forever, it will reveal itself someday. You cannot continue to deceive Nigerians.

“Every word that has come out of my mouth before the President’s return, I have no apology for them. President Buhari was indeed in coma and one of those who visited him said his recovery is a miracle, that shows that he was indeed very sick.

“Let Buhari go back to Daura and rest. Don’t send him to early grave. Buhari is not old enough to be my father, my mother is older than Buhari, he cannot be my father, he can only be my uncle. I am close to 60. I stand by all I have said about the President. We are glad he is back, but don’t over flog him.

“I am not a sycophant and I stand to speak for Nigeria. Somebody must be able to speak on behalf of the poor masses. This was how they deceived us during the time of Yar’Adua. I am not a hypocrite and I will never be one. This country deserves a very healthy person. The office of the president is not for a sick man. The president is tired and should be allowed to resign and go and rest,” he said details later.

“I have said it severally and without apologies. Everything I said when the President was away, I stand by them. The president actually went into coma and this was attested to by what one of the governors who visited him when he was abroad said that his recovery was a miracle. When somebody’s recovery is a miracle it simply means something very serious happened to the person.

“Since the President himself cannot disclose his health status and also the extent of his ailment, it apparently shows that there is so much to hide. Not until civil societies and people like us started making noise. You can’t be our president without us knowing what is happening to you. So, for me, the president went to coma July 6. Today, they can come back and organise rallies and all that; they attested to the fact the President recovered by miracle which we are glad about. We are happy th at he is back But when you look physically look at the President he is physically. You will see that he is emaciated tired and weak.

“You don’t have to be president at all cost, when you are tired. You go home. I don’t want to talk about 2019′ but I want to tell you that Nigeria needs a president that is agile and strong. The job is too much for an individual that does not have what it takes. It is a common saying that health is wealth. Everything is about health. We wish him well and we want him to recover but the President should throw in the towel , resign and go home.

“Now they said he is working from home, tomorrow, they would say he is coming from bedroom. All these stories are ending up in a make believe. In a country where you have so much to do, I m not going to be a sycophants here. I am going to be on the side of the common man, the President is tired. I feel for the president like every other elderly persons, or even people who are not elderly. They could be sick. But when it comes to the issue of governing a country. There is so much responsibility to this and we must equally be able to stand up and say if the president does not have what it takes to continue, he should throw in the towel.

Asked if he would oblige if invited to see Buhari, Fayose said: “I cannot go and greet the president if invited and the reason is that such action would be misinterpreted to be something else. So, it is good for me to wish him well from a distant and be able to tell Nigerians the truth.”

“I can’t commit suicide because of Buhari. I never said that and will never made such statement. Truth is that the pressure from me and many other Nigerians made the president to return home. They have been treating this matter under the table forgetting that the life of a president is an open book that can be read by everybody and anybody. What I am saying in effect is that it is in the overall interest of everybody that we have a president that is strong enough to do the job,” Fayose insisted