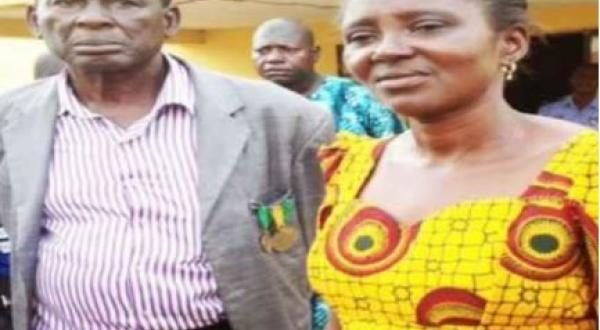 Spread the love
In 1990, Martha Eyong, a Cameroonian, was 16 years old when she came to Nigeria to write the West African School Certificate Examination (WASCE) in Calabar, Cross River State.

According to a report by Daily Trust, the young woman had come in the company of few friends who were also natives of Cameroon to write the same examination. But four days after their coming and having written some papers, Martha’s path crossed that of one Alhaji Aliyu Ameh, who allegedly hypnotised her with a powdery substance and took her away, first to Lagos and then to settle with him in Otukpo, Benue State.

Ameh was alleged to have raped his victim and put her in the family way while ensuring that no one had close relationship with her over the years as he kept an eye on her and the two children produced from the unlawful union. Luck, however, ran out on him last week when he was apprehended by the police at a court premises where he had dragged a certain individual to on account of his closeness to his ‘wife’.

The State Commissioner of Police, Fatai Owoseni, who paraded the alleged abductor before newsmen at the police headquarters in Makurdi, said the man would be charged to court for kidnapping and rape of a female victim.

“The victim, a Cameroonian, came to Nigeria in 1990 to write WAEC. While with her friends, she came across an elderly man who bought food for her and hypnotised her. She had given him children in the process. Her father had been looking for his daughter for the past 28 years. The abductor kept her in a way that no one could reach her,” Owoseni said.

The police commissioner added that someone who she narrated her predicament to, helped to trace her family which subsequently led to the arrest of the man in Makurdi early last week. Corroborating the police, Martha, who said her abductor changed her name to Sabina Ameh, said the incident happened on the fifth day of her arrival to Calabar for the examination when the man came by her side and ordered her to look at him.

She added, “He asked what I wanted to do with the N20 in my hand and I said I wanted to buy food, he collected the money and bought food for me, then he poured a substance like powder in a handkerchief which he sprayed in my direction and ordered me to follow him.

“And that was how I did whatever he said. I followed him to wherever he wanted, he took me to Lagos, I had to ask someone when he was not watching where I was and I was told it was Lagos. I begged him to take me back to my parents in Cameroon, he agreed and the next day I found myself somewhere I did not know and when I inquired someone told me I was in Agila in Benue State.

“Whenever he realizes that I’m in my senses and asked questions, he would repeat the handkerchief spray on my face, then I will begin to do exactly what he wanted. He forcefully slept with me most nights and he prevented everybody in the village from talking to me. It was when I got pregnant that he brought me to Otukpo,” the woman narrated.

Martha, now 44, said the man threatened to kill her severally if she divulged any information to anybody, adding that with time, she began to sell firewood to support her domestic needs until recently when she tricked him that she was going to the market but instead went for prayers at a church in Otukpo. She said the pastor at the church revealed everything about her life to her to the extent of addressing her by her real name which no one there knew, adding that it was there she met a footballer who often go to Cameroon and helped to traced her family.

According to her, one of her daughters has already graduated from the university while the other one is currently a student of the Federal University of Agriculture Makurdi. The elated woman who was all over her father at the police premises in Makurdi said she could no longer speak her native Cameroonian language but now speaks Idoma fluently after being in captivity for 28 years.

The victim’s father, Eyong Michael, 76, who said he worked as a senior staff of the Ministry of Transport in Cameroon, resorted to prayers after his daughter failed to come back after the exams in 1990. He came to Nigeria severally to look for her but to no avail.

“I’m a very happy man today. I thank God for reuniting me with my daughter. All I want now is for justice to take its course; the abductor should not be granted bail. I plead with the Nigerian government to ensure he faces the consequences of his action. As for my grand children, I’m prepared to take them back to Cameroon,” Eyong concluded.