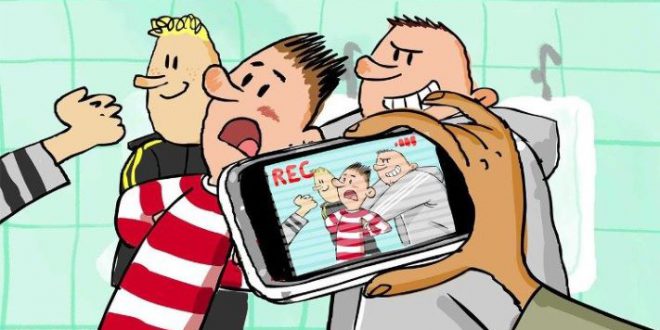 Bullying: Defining and reproaching it with disingenuity

“……. [Not long before the end of 15th century] the British Isles and western Europe in general were but distant backwaters of the Mediterranean world. Little of importance ever happened there. Even the Roman Empire – the only important premodern European empire – derived most of its wealth from its North African, Balkan and Middle Eastern provinces. Rome’s western European provinces were a poor Wild West, which contributed little aside from minerals and slaves. Northern Europe was so desolate and barbarous that it wasn’t even worth conquering …….” (Yuval Noah Harari).

This is the first day of the first month in 2022CE – on the Gregorian calendar! The year 2021CE is history! History can be interestingly enlightening. It can even be very illuminating especially when it is not rendered – only – from the perspective of the ‘conqueror’. All sides of a historical rendition (which are, unfortunately, almost always, not complete on the table) may offer us the opportunity to make informed and ‘objective’ judgement of past happenings. Regrettably, as implied earlier, the annihilated parties, in wars, for instance, do not always have the opportunity to relay their side of the story! That is the reality, in most cases, concerning what is/are presented/accepted as history! Thus, ‘history’ may be perverted, deliberately made disjointed, biased, warped, muddled up, revised and sometimes outrightly contrived.

Consequently, ‘conquerors’ make efforts at transmitting ‘history’ – theirs and others’ – orally and/or in written form, from one epoch to the other, fearlessly justifying its content, for themselves and against the annihilated side(s)! ‘Conquerors’ may be ‘benevolent’ at transmitting ‘history’ of and for the vanquished! It, therefore, suffices to say that ‘history’ is never ‘complete’ without the (unavailable) account from the vanquished! This account, if not lost in history, is difficult to come by and propagate! Nevertheless, efforts toward this is important, without losing sight of the fact that it is unfair to judge history using today’s standard. We do not intend to analyse history, here, using today’s standard. This, of course, will be unfair! Yet, we all still need to go into history and relate it to the present in order to help the future.

When the news of the death of a 12-year-old boy named Sylvester Oromoni Jnr. went viral, it was as if the ‘unusual’ happened. True to type of a pretentious, deceptive, reality-denying and lying society such as the current Nigeria, there was an insincere hullabaloo that appears to have died down, today! We want to believe this is so because of legal implication(s) of discussing it in the public domain! Newspapers and other news outlets, then, vociferously reported that the late Sylvester Oromoni Jnr. was allegedly beaten by fellow students in such a way that it resulted in his death. The phenomenon was swiftly described as bullying! We send our heartfelt condolence to family/friends of the Oromonis and others that have suffered from such a catastrophe! This kind of traumatic experience is better imagined than experienced!

We hope this kind of calamity does not repeat itself in the life of another family. Sadly, we can only hope against hope! This is because we have a society where bullying is entrenched in – right from the family level! Maybe there is a poor understanding of what bullying means. We may need to consult a dictionary. Cambridge online dictionary says it is simply “the behaviour of a person who hurts or frightens someone smaller or less powerful, often forcing that person to do something they do not want to do”. Is this definition of a bully strange to us, Nigerians? Well, it can only be ‘strange’ to those engaging in bullying!

Take for instance: how do we describe the many types of spousal abuses? What about parental/guardians’ abuses of their children/wards? What of the abusive relationship between the all powerful bosses and their subordinates? Is sexual harassment, everywhere, excused from this list? Can we extend this argument to how ‘big men’ in our society oppress the lowly? Are we ‘permitted’ to talk about how those in government treat other common Nigerians with disdain? How do you explain why charlatans in government give the impression that they know more than everybody, so all must kow-tow? How do you describe a society that allows their intellectual/intelligentsia community to be rubbished by the half-wits?

What do you call groups of people who are happy when academics, in universities, are pauperised and presented as worthless beings? What kind of description should we give to a government that ‘sanctioned’ the brutal shooting of peaceful protesters with live bullets procured with these citizens’ resources? What about the blind commodification of education in a society of deliberately-unequaled opportunities? Is the use of platforms to suppress alternative views not part of what is being described here? If these and others are not bullying, what then is/are? Hear this: bullying is an integral part of Nigerian society; it is either we like this truth or not! We have only been deceiving ourselves, all along, by engaging in escapism, always!

We cannot be idolising brutes and at the same time expect to have a society that is not dominated by bullies! A people’s actions and inactions toward oppressive and suppressive tendencies will be the major determinant of the kind of a society that is being developed when considering bullies and bullying. Yes, we know that those being bullied are at a disadvantage now but what marvels is that when the table turns, instead of making corrections, the bullied just seamlessly transmute to bullies! This vicious circle is what manifests in our daily dealings, both in private and public! We must sincerely learn from history for this to change! Going back to where we started from, history, if care is not taken, has a way of repeating itself.

For instance, the quotation above from Harari, a historian, clearly described how ‘unimportant’ Western Europe was in relation to the Mediterranean world, up to and during the medieval period. During this epoch, perhaps, those Europeans would have seen themselves as victims of bullying even as we also have the unmistakable history of “the systematic degradation and exploitation of the Irish and Welsh peasantry by the English over several centuries after the conquest of Ireland in 1171 and that of Wales in 1282” using the words of Plantagenet Somerset Fry also known by other pseudonyms but born Peter George Robin Fry (1931–1996). This is Europe that Walter Rodney (1942–1980) says ‘underdeveloped’ Africa!

Everything changed for Europe at the end of the fifteenth and early sixteenth century when science took over, particularly from England. From this point onwards, again, it does appear that Europeans – themselves – became bullies to other parts of the world! Opinions may vary concerning this depending on the prism through which it is seen by interested parties since any occurrence can be obtained from history to justify one’s point(s). Nonetheless, the point being made here is that humans are wired, somehow, to be bullies, even as the ‘definition’ of bullying has changed over the years. Many of us are bullies without actually knowing! On the other hand, bullies, with knowledge of what they are, always justify their actions and leverage on inadequate/lack of protection for the bullied. Once a society collectively fails to restrain and correct this human frailty, then it (society) is bound to continuously encounter the kinds of disasters worse than that experienced by the family we mentioned above and others suffering in silence.

This is not a case of being prophets of doom! It is what it really is! You cannot be rewarding oppressive brigands and an irredeemably predatory state and not expect bullying to flourish in such a society. Again, let truth be told, Nigeria currently provides fertile ground that nourishes bullies and bullying! Many of us – knowingly and/or unknowingly – are struggling to become bullies! As might is considered right in our society, we drown the cries of those being bullied in the lagoon of helplessness until another disaster happens to another victim! We will shout, as usual, and everybody will later be quietened, consoled and lulled to sleep with the usual ‘it is one of those things’. Is it really one of those things? It used to be but no more! Some humans – like us – have been able to work on their system to fight bullying. Bring up humans in functional families, develop acceptable rules/laws that discourage bullying, and enforce these rules/laws when deviants go roguish, no matter whose ox in gored! It is that simple for a sincere people! History is about to be made! Let us take positive actions that will benefit mankind soon and in future.