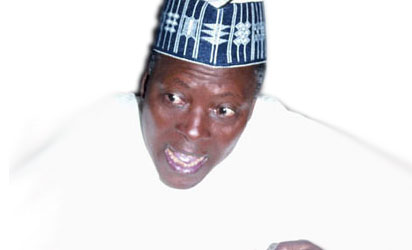 Dr. Junaid Mohammed, a Second Republic lawmaker, has warned President Muhammadu Buhari not to contemplate seeking re-election in 2019, saying Nigerians are already divided under the present government and the situation will be further worsened if Buhari continues beyond 2019.

Junaid also flayed governors of the All Progressives Congress (APC) who adopted President Buhari as the sole candidate of the party for the 2019 presidential election.

Junaid, who also questioned the president’s integrity, recalled an interview granted by Buhari in 2011 where he promised to run for only one term on account of his age.

“First and foremost, I don’t know who are the people urging him to contest election in 2019. But I knew, he gave an interview to a national newspaper and said he was going to contest and serve for only one term. There are quite a number of people who know the paper and the date of the paper. I believe if he is responsible and honourable he is supposed to be bound by what he undertook to do.

“Most Nigerians will say he is not the only politician who made a promise, but broke it. I don’t believe it is honourable for somebody to make a promise and march on that promise simply because it is his own convenience or his friends or ministers tell him to do so”, he said.

The outspoken ex-lawmaker also declared that Buhari has not done enough to seek re-election.

“Second issue has to do with performance. In a democracy, for there to be a legitimate government, you must win a free, fair and credible election. Even if you don’t come by way of democracy, there is what you call in political terms, ‘performance legitimacy’”, he noted.

Junaid, who said many Nigerians no longer believe in Buhari’s competence to lead the country, advised him to go home and take care of his health after completing his term in office.

“Now, if we were to be sincere, we would say let this man stand and we make him lose the election. But, the fear we have is that by winning the election, by insisting that he must contest, he must also win. That means rigging.

“He will further divide the country and if he succeeds in winning the election, there may be violence in the course of the election, or after because, clearly, majority of Nigerians do not believe in his competence, do not believe in his integrity or anything anymore. He has done one term, let him go home and rest and take care of himself. That is my advice”, he said.

Also evaluating the performance of APC as a ruling party since 2015, Junaid said the party has failed to fulfil its promises to Nigerians especially as regards the fight against corruption, improving the economy and waging a total war against corruption.

He argued that though the APC met a damaged economy, the party and its elected government officials have worsened the situation through lies and unworkable policies.

“By the promises made by the APC government and the lousy cast of characters brought into government, they have failed and failed miserably. First, they promised to take the Boko Haram and defeat it. Everybody you talk to will tell you that Boko Haram is alive. It has not been defeated in spite of the lies emanating from the presidency and some of the Generals.

“Secondly, they promised to fight corruption. Not only have they engendered and encouraged it, it is now at the highest level at the presidency. This is why we are not making any appreciable dent in the fight against corruption.”