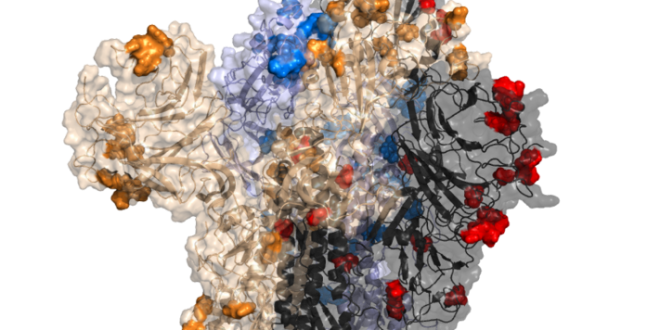 Omicron's spike protein with new mutations seen in red, blue, gold and black. Pic: Centre for Virus Research at the University of Glasgow

According to Premium Times apart from the permanent secretary in the State House, Tijani Umar; the President’s Aide-de-camp (ADC), Yusuf Dodo; his chief security officer (CSO), Aliyu Musa, and his senior special assistant on media and publicity, Garba Shehu, whose results were confirmed positive during the week, the minister of information and culture, Lai Mohammed, is also down with the virus.

But the Nigerian government is keeping a sealed lip on the matter, even as newspapers correspondents are advised against reporting the surge in infections at the villa.

Some of the infected officials including Mr. Garba, sources disclosed, were taken out of the cabinet meeting on Wednesday when the result of their polymerase chain reaction (PCR) tests came back positive.

Mr. Shehu, who confirmed that he was “afflicted by the mild variant of the Covid-19,” in a text message shared with  Preimium Times reporter on Saturday, said he has “no confirmation” of other cases mentioned to him.

He added that he was already fit, claiming he just completed his physical exercises when the reporter called, but that it would require scientific evidence to claim that he no longer had the virus.

His message reads in part; “I have no confirmation of the cases you mentioned, but yes I have been afflicted by the mild variant of the Covid-19. I felt okay from the beginning, maybe because one had received all three jabs, and right now, I feel 100 per cent. I just finished my hour-long running exercise.

“But the strange thing about this ailment is that it is the scientists, not you, that will say you are okay. Right now, I’m taking my prescriptions and isolating, and would go back for a test to ascertain if the virus is still here or it has left me. Thanks for your goodwill.”

It is also understood that the high number of officials affected by the pandemic, governance may have been affected at the centre.

Sources, who do not want to be quoted for fear of sanctions, said that the decision to shut down the office of the wife of the President, Aisha Buhari, earlier in the week, was not unconnected to the huge number of officials at the State House that were already confirmed positive for the virus.

The special adviser on media to Mrs. Buhari, Aliyu Abdullahi, said though the situation was not part of the reason advanced for the early closure in the statement issued, it could also not “be unconnected to it.” He, however, declined to either confirm or decline, saying the president’s wife may have taken the decision to avoid the spread of the virus.

Charles Igbinidu is a Public Relations practitioner in Lagos, Nigeria
@https://twitter.com/ionigeria
Previous Estate agent shot dead ‘by evicted tenant as she was showing home to potential new tenant’
Next Meet Balogun, Okonkwo and other highly-rated Arsenal kids who could break into first team after academy’s transformation