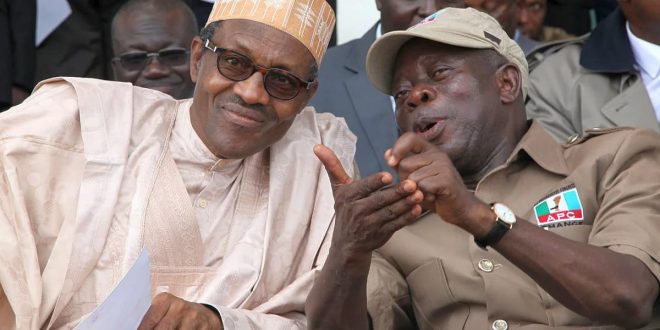 Buhari to visit Edo as part of send-off for Oshiomhole

President Muhammadu Buhari will pay a 2-day official visit to Edo State on Monday 7 November. The visit will end Tuesday, just in time before Governor Adams Oshiomhole ends his tenure on 12 November.

In a statement issued by the Secretary to the State Government, Prof Julius Ihonvbere, the President will use the occasion of his historic visit to pay a courtesy call on His Royal Majesty, Omo n’Oba n’Edo Uku Akpolokpolo, Oba Ewuare II.

Oshiomhole, who became governor eight years ago will hand over to his protege, Godwin Obaseki on 12 November.

Oshiomhole, who is already thinking of life after retirement spoke  a few weeks ago about his legacy:

“I want to be remembered as a factory worker who worked and laboured as a daily paid worker in the most subordinates post in textile mill.

“Rising to become leader of the textile union and eventually spending eight years as NLC president, then going back home to confront the most feared and vicious godfathers that monopolised Edo state.

“I fought godfathers, which is essential to make way for liberal democracy”.