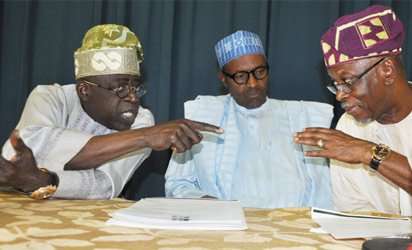 The Senior Special Assistant to the President on Media and Publicity, Malam Garba Shehu, has dismissed insinuation that President Muhammadu Buhari  and the APC leadership are at odds with one of the party chieftains, Asiwaju Bola Tinubu.

Shehu described such rumours as unfounded and mischievous, adding that the president was highly embarrassed by such “suggestions”.

He said that the president was in regular contact with Tinubu before, during and after the Ondo State gubernatorial election.

He said any suggestions that the president and the party machinery were working to destroy Tinubu had no foundation in truth or any credibility.

Shehu explained that the president was impressed by Tinubu’s assurance not to work against the party in Ondo State and he honoured his words.

According to him, Buhari regards Tinubu as a priceless political asset to the party whose immeasurable contributions to the development and progress of the ruling party are known to all.

Shehu advised rumour mongers to stop spreading the seeds of discord and animosity between the president and Tinubu or the party.

He added that “the president is proud of the Jagaba and his pivotal role in the party and the movement.’’

He said the president commended Tinubu’s spirit of comradeship in promptly congratulating Rotimi Akeredolu, who was elected Governor of Ondo State.

“The president also noted that at a time his administration is preoccupied with governance issues, rumours of divisions and alleged scheming within the party are counterproductive to internal unity and cohesion in APC,” he said.

He appealed to APC members and supporters to ignore rumours that could harm party unity.

Charles Igbinidu is a Public Relations practitioner in Lagos, Nigeria
@https://twitter.com/ionigeria
Previous Jegede not going to court, Mimiko Congratulates Akeredolu-Sources
Next How Legislative Aide collapsed and died at the National Assembly