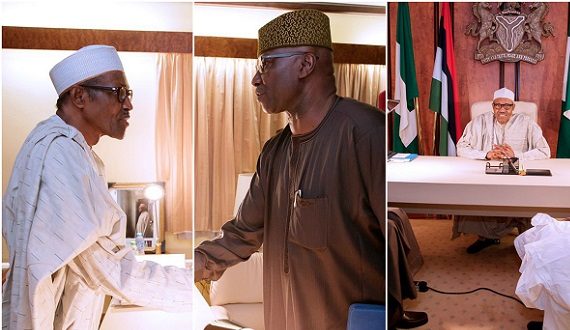 President Muhammadu Buhari has inaugurated the new Secretary to the Government of the Federation, Mr. Boss Mustapha.

Buhari also inaugurated the Armed Forces remembrance emblem. He commended men of the Armed Forces for their courage and sacrifices as they grapple with diverse and contemporary security challenges plaguing the country.

The President said it was worthwhile to honour the memory of veterans who paid the supreme sacrifice to keep the country united.

He said, “The resolve by our countrymen and women to remain in one indivisible and indissoluble nation, Nigeria is at the centre of this celebration.

“Indeed, the Remembrance Day Celebration is being marked on the 15th of January instead of 11th of November as in other Commonwealth nations to commemorate the end of the Nigerian civil war – a war that was fought to keep Nigeria one.

“We must, therefore, cast our minds back at the events that led to the civil war, the immense human capital loss of the tragic war, and resolve that never again shall we allow our dear nation by our actions or inactions to experience another war.”