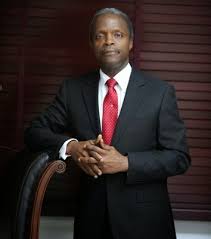 How Buhari Stopped Osinbajo From Assigning Portfolios To New Ministers

This came more than three months after the Senate confirmed their nominations. They were, however, not assigned portfolios.

After swearing in the ministers, Osinbajo said that portfolios would be assigned to them “shortly”.

It is understood that his decision not to assign the new Ministers portfolios was deliberate, as the Acting President was only acting on the instruction of President Muhammadu Buhari.
Osinbajo sought permission from Buhari to swear-in the two ministers, assign them their portfolios and reshuffle the cabinet when he visited him the last time in London.

However, the President asked him to hold on, because he hopes to assign the two new Ministers their portfolios and also reshuffle the cabinet upon his return.

Ocheni replaced the former Minister of State for Labour, Mr. James Ocholi, who died in a ghastly motor accident in March 2016, while Hassan replaced Ms. Amina Mohammed who until her appointment as the United Nations (UN) Deputy Secretary-General, was the Minister of Environment.

Previous Protest In Newyork, Washington As Trump Bans Transgender In U.S.Military
Next Son Beats 62-Year-Old Mother To Death In Ebonyi