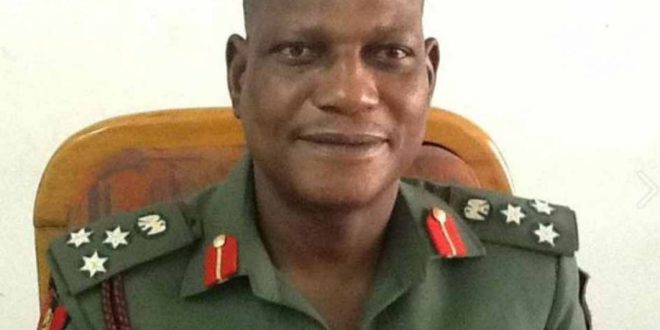 President Muhammadu Buhari has granted a state pardon to Enitan Ransome-Kuti, the former military Commander of the Multinational Joint Task Force, who was convicted by a Special Court-Martial in January 2015.

The former military commander was among the 162 prisoners pardoned by the National Council of State at a meeting presided over by the Nigerian leader on Thursday.

Mr. Ransome-Kuti was arrested in early 2015 and tried by the special court-martial for cowardice while serving as Commander of a Joint Multinational Task Force in Baga.

The former officer was later punished for his “failure to perform military duties” and sentenced to six months imprisonment and a reduction in rank from Brigadier-General to Colonel.

According to PREMIUM TIMES Ransome-Kuti, who was sacked from the army after his conviction in 2015, was pardoned on compassionate grounds.

Human rights lawyer, Femi Falana, who is a Senior Advocate of Nigeria, was his lawyer, and over 60 soldiers at the Special Court Martial, wrote letters to have their punishments set aside.

The Army Council would later quash the six months’ imprisonment passed on Mr. Ransome Kuti and commute the death penalty imposed on the other 60 soldiers to 10 years jail term based on Mr. Falana’s letters.

Mr. Falana also wrote to other relevant authorities including the presidential committee on prerogative of mercy to seek their pardon.

The senior lawyer argued that his clients’ conviction by the court-martial was baseless in the face of evidence that they were deprived of arms to fight at the peak of the Boko Haram war.

The full list of those pardoned is not immediately available, but sources confirmed to PREMIUM TIMES that the soldiers convicted of mutiny constituted a bulk of them.

Sources also said among beneficiaries are a former army lieutenant colonel, Oluwole Akinyole, who was granted a posthumous pardon, and a former military general and minister under the Sani Abacha regime, Tajudeen Olanrewaju.

Speaking with PREMIUM TIMES on Saturday, Mr Falana said the implication of the pardon is that Mr. Ransome-Kuti, 57, can return to service and regain his brigadier-general rank.

“With this pardon, the record of conviction of the other soldiers has been obliterated and can go back to service if they wish to,” Mr Falana added