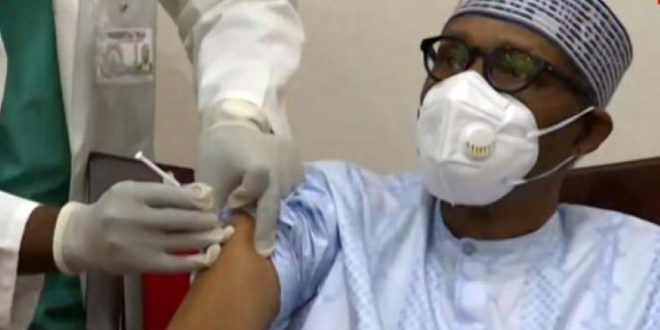 President Muhammadu Buhari has received the AstraZeneca vaccine, a day after the Federal Government launched the vaccination exercise in the country.

He took the jab on Saturday at the new Banquet Hall of the Presidential Villa in Abuja, the nation’s capital.

The vaccine was administered to the President by his chief personal physician in the presence of the Vice President, Professor Yemi Osinbajo, and some members of the Federal Executive Council (FEC).

Shortly after President Buhari took the jab, Professor Osinbajo also received the vaccine which was also administered to him by his chief personal physician.

Both leaders were later presented with electronic cards containing the details of their vaccinations by the Executive Director of the National Primary Health Care Development Agency (NPHCDA), Dr Faisal Shuaib.