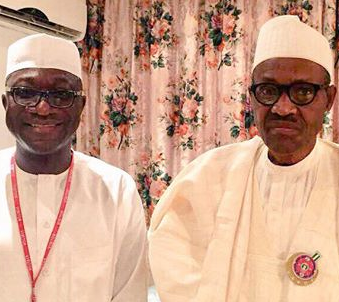 Jibrin, a member representing  Kiru/Bebeji Federal Constituency of Kano State, was suspended in September 2016 after he accused the leadership of the House of Representatives of padding the 2018 budget.

Before his suspension, Jibrin was the chairman of the House Committee on Appropriation.

After his meeting with President Buhari, Jibrin met with state house correspondents. He said

“As you are aware, I have not seen the President for a while now. It was a meeting between a son and a father,” he said.

When asked if his meeting was about his suspension, Jibrin said “I cannot comment in that regard. The most important is that I saw him and he was in a very high spirit. I greeted like a son and he spoke to me like a father.”

Previous Stranded UK-Based Nigerian Man Roams The Street Of Lagos
Next Policeman Schemed To Blackmail Wife, While She Plotted His Murder