Home / News / Politics / Buhari would be disgraced in 2019 if he doesn’t change says Rev. Mbaka 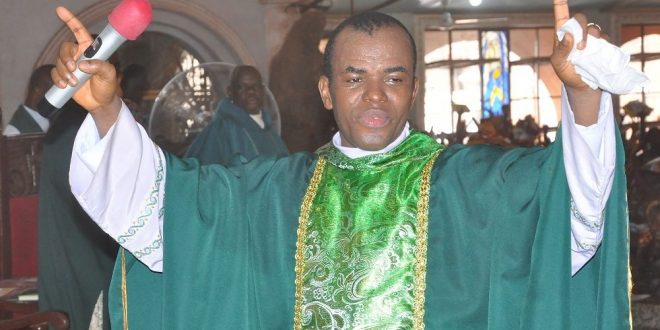 Buhari would be disgraced in 2019 if he doesn’t change says Rev. Mbaka

Just as he predicted that former President Goodluck Jonathan was going to be defeated in the 2015 presidential election, outspoken Catholic Priest, Rev. Fr. Ejike Mbaka has declared that unless incumbent President Muhammadu Buhari makes some urgent changes, he would be humiliated out of office in 2019. He gave the admonition during his New Year message in Enugu.

“The Lord wants Nigerians to be speedily rescued. Things are difficult and tough. The hardship is not from God, they are man-made. The cabals and satanic agents in this country have  kidnapped the goodwill and good intentions of Mr. President. He must wake up and sit up. Heaven demands Buhari to change those who are holding and caging him in captivity. If he will not change them, he will be changed. Mr. President should wake up. God said you are toying with the privilege given to you. Nigerians are dying in your hand; people are not happy with your system. Change or you will be changed. God said that Buhari is in trouble; he is hypnotized and his  mantra has been cannibalized.

“Unless President Buhari quickly and strategically, positions the right people and changes the former ones inaugurated by him, the wind of change that he  inaugurated will end his regime . The wind will be too strong that Mr. President and the cabal will be blown out of office shamefully. Buhari should  handle this problem  or bear the consequences.

“Number two, if he doesn’t want to move Nigeria forward, God says He himself will plan a strategy of moving Nigeria forward. His pattern of battling corruption is archaic, barbaric and selective. Mr President, why should you be picking and choosing those that you and your EFCC would want to arrest? Your party has become a hideout for criminals, so that any person who does not want to be arrested will become an APC person. Is that not corruption in itself?

“Mr President, you need to change, or you will be changed. You are the one who introduced change as your mantra. Nigerian economy is in shambles and Nigerians are in sorrow. Nigeria is not just passing through an economic depression but also  economic repression and compression. Very soon, Nigerians will know that the country is in a terrible mess. The cabals have messed up the President and confused him.

“So, Mr. President, you are to be blamed, not your cabals. You have your brooms, but the cabals have their bags. Either you sweep them away or they sweep  you  into their bags. Your methodology is archaic and sluggish.

“Your change mantra is questionable; you are to change or you will be disgraced out of office. Your agriculture scheme has an anti-agenda that is cancerous. Why should you be talking about agriculture and you leave the Fulani herdsmen? Farmers don’t have hope. Don’t you hear what is happening in the country? Can’t you use your presidential mandate and help the less privileged?’’

Continuing Rev. Mbaka said   “Mr. President is just president in the mouth and not the real president. He is a pseudo president, people are running the government the way they like and giving him to articles to sign; Mr. President doesn’t know what is happening in his government, what a pity.”

“Mr president tried his best to war against insurgency, he tried to stop excessive spending, living in opulence, he is an expert in stopping opulent life, swindling of government property but the way he is going after it, he is too slow. God loves him and gave him the mandate, he wanted to fight corruption but corruption is fighting him back.”

Asked to react to the statement of the Catholic Priest, the Senior Special Assistant to the President on Media and Publicity, Malam Garba Shehu said he will not comment on  the statement until there is confirmation that he said it.

Malam Shehu who spoke to Vanguard on telephone said that there was a statement credited to the cleric about two weeks ago which he later disclaimed.

Shehu said: “I am not going to respond until I see the text,   I haven’t seen the text. I heard Father Mbaka two weeks ago say something and the next day he refuted that he said it.

“I don’t want to take it on the face of what you have said, when we get confirmation that he said it, we will respond. Don’t be surprised  tomorrow  he may come out and say he didn’t say it.”