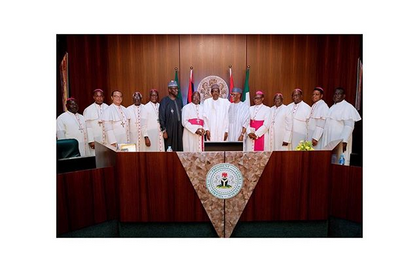 Pres. Buhari, told Catholic bishops that he would take a second look at appointments made by the Federal Government to redress issues being raised.
He said the review will be done after a compendium of all appointments has been submitted to him.

He told the bishops that no ethnic group or political zone has been deliberately marginalised in the appointments made so far by his administration.

He was obviously reacting to criticisms that he may have violated the Federal character principle in some of the appointments made.

The last time a compendium of appointments was done, the South West region led the rest of the country.

The president also explained that the policy proposed by FG in response to the frequent clashes between herdsmen and farmers in the country is not meant to colonize any part of the country.

He said the intention of government is to create grazing locations for cattle rearers, which has now been misconstrued as another form of colonization.

Pres. Buhari regretted that the well-thought out policy of the FG, which was conceived after wide consultations with stakeholders, had been largely misunderstood by a section of the public.