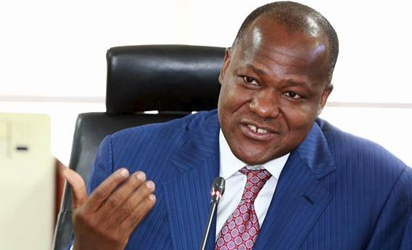 The Economic and Financial Crimes Commission has invited a former Chairman, House of Representatives Committee on Appropriation, Mr. Abdulmumin Jibrin, to clarify allegations that the Speaker, Mr. Yakubu Dogara, and three other principal officers “padded” the 2016 budget in excess of N40bn.

The others are the Deputy Speaker, Mr. Yussuff Lasun; the Chief Whip, Mr. Alhassan Ado-Doguwa; and the Minority Leader, Mr. Leo Ogor.

He had also alleged that up to 10 committees of the House introduced projects worth about N284bn into the budget.

Jibrin, a member of the All Progressives Congress from Kano State, was suspended by the House after its internal investigation submitted that he “abused” the rules of the legislative house by making the padding allegations.

In a letter dated June 9, but delivered to the suspended lawmaker on Monday, the anti-graft agency stated that it had opened an investigation into the matter.

However, it noted that Jibrin’s presence was needed for the lawmaker to clarify the allegations.

The invitation letter read in part, “The commission has commenced investigation into the petition of corruption and corrupt practices and abuse of office reported on August 1, 2016 by Hammart & Co (Tafida chambers) on your behalf against Yakubu Dogara, Yusuf Lasun, Alhassan Ado-Doguwa, Leonard Okuweh Ogor and others.

“In furtherance of the investigation and due to unfolding findings, it has become imperative to request that you attend another interview with the team through Ibrahim Ahmed on June 13, 2017 at the 3rd Floor Block A, No 5 Fomella Street, off Adetokunbo Ademola Crescent, Wuse 2, Abuja, by 10am to clarify some issues to enable us to conclude investigations.”

But the former committee chairman immediately celebrated the commencement of investigation into the allegations, describing it as “a welcome development.”

He stated that up until now, Nigerians were beginning to think that his petition would not be treated.

“I have maintained several times that I have full confidence in the EFCC under the chairmanship of Ibrahim Magu.

“I am also aware that the EFCC has been investigating the petition I submitted and far- reaching discoveries were made,” he added.

According to him, part of the discovery was that a principal officer allegedly used his firm to execute constituency projects in breach of extant laws.

Jibrin alleged again that the 2017 budget, signed into law on Monday by Acting President Yemi Osinbajo, contained issues he would soon reveal to Nigerians.

“In due course, I will expose a lot of other issues in the 2017 budget that will shock Nigerians whether the authorities decide to act on it or not,” he added.

The EFCC had, last week, blocked over N116m belonging to Ogor, the only Peoples Democratic Party principal officer among the lawmakers accused of corruption by Jibrin.

The cash is the outstanding sum in the accounts of five of the six companies owned by Ogor with which he allegedly secured contracts from some agencies as constituency projects.

The EFCC further alleged that N318m was paid to two of Ogor’s companies by the Niger Delta Development Commission.

Previous Police Inspector Caught With 49 Bags Of Indian Hemp In Lagos
Next Iheanacho: Struggling To Live Up To His Billing