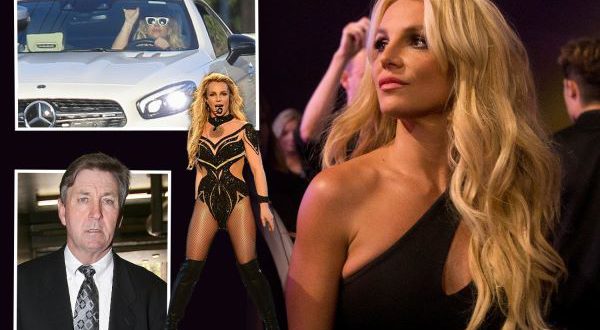 Britney Spears will see her financial fortune rocket following the news her father plans to step away as her conservator, after legal experts claimed he had hidden a large percentage of her wealth for years.

The pop superstar, who has sold more than 100 million records globally and performed ten major tours, is valued at a relatively modest £43million but is believed to be worth more than double that.

Jamie Spears, 69, became her conservator in 2008 but late on Thursday night his lawyer said he “intends to work with the court and his daughter’s new attorney to prepare for an orderly transition to a new conservator”.

Shortly before the news broke, Britney posted a video on Instagram of herself dancing with the caption: “Letting go is freedom,” followed by a mysterious painting of a woman from behind.

Hours later, she was seen driving her white Mercedes near her Los Angeles home — having previously not been allowed to drive under the terms of the conservatorship.

Britney, 39, has ramped up her fight to be freed from her conser­vatorship in recent months.

But in June she took aim specifically at her father when she told a court he “loved the control he had over me, one hundred thousand per cent.”

Fears of siphoned off cash

Now The Sun can reveal that financial documents submitted to the court during the last 13 years of her conservatorship have only included limited details of her fortune, with Jamie declining to value her intellectual property (IP) — including her music royalties — meaning it is not included in any official figures.

Legal experts believe that means “80 or 90 per cent” of her income has not been accounted for, over the course of more than a decade.

It is feared that people involved in her conservatorship, including her father, could have had the opportunity to siphon off extra money from her businesses without the court’s knowledge.

Weston Anson, chairman of Consor Intellectual Asset Manage­ment, who has worked with stars including Tiger Woods and Lady Gaga, said: “The value from her IP is going to be 80 or 90 per cent of her income. It’s her residuals from specials, TV, personal appearances, music, fragrances — all of that.”

Although the court overseeing her conservatorship sees Britney’s personal expenses, they do not see all of those of her private limited companies.

Instead, they are only privy to the balance at the beginning and end of the year.

Over the past 13 years, not only has Jamie taken over many of her existing companies, he has formed a further 12 relating to her career.

That could have potentially provided an opportunity for him, or other officers, to pay themselves from these companies without the court’s knowledge.

A US attorney, April Ball, said: “It just seems like the conser­vator­ship is a sham for embezzlement. That’s my opinion. It feels like a money movement move by a lot of different players.”

The conservatorship was formed in 2008 due to her parents’ fears that Britney was being taken advantage of financially.

But it has led to astronom­ical fees, all of which Britney has to foot the bill for.

Little is known about the exact sum the superstar has earned over the past 13 years, or where those earnings have gone.

Her four-year Las Vegas residency, which ended in December 2017, is believed to have made a gross income of £100million.

She is believed to have been paid £10.8million to be a judge on The X Factor USA in 2012, mentoring contestants when, in the court’s eyes, she was not deemed able to look after herself.

But one of her most lucrative deals could have come from her popular perfume range.

IP expert Weston told the podcast Toxic: The Britney Spears Story: “They can be very lucrative. $20mill­ion a year to the celebrity is not unusual.”

That is why it is so baffling that she is valued at only three times that — as she has released 25 perfumes since being conserved.

Over the years, it has become apparent Britney hasn’t seen much of the money she has worked so hard for.

Her hair colourist Kim Vo recall­ed how he went out for dinner with her in 2012 in Las Vegas.

The bill came to just over £900. But he said she told him she couldn’t afford her half of it.

Even while on The X Factor USA and performing in Sin City, it has been claimed she was limited to a £1,400 weekly allowance, no matter how much she earned.

Most conservatorships don’t allow someone to profit off the people they are created to protect, but in California that is not the case and Jamie has made a considerable amount of money from the situation.

He has received annual fees of almost £140,000 for his role and earned a commission of £1.8million for two of her biggest ventures — her Vegas residency and her 2011 Femme Fatale tour.

Austin Bertrand, an expert in trusts and estates on the financial side of conservatorships, said of Britney’s situation: “I have definitely noted that there is a lot of opportunity to compensate oneself warmly just by being a part of this administration.

“Arguably a lot of the work is being farmed out to the attorneys and the accountants who are also making money.

“Yes it is Jamie signing off on this stuff, he’s the one who’s got the risk and he’s got the fiduciary duty to Britney.

‘In the gutter financially’

“Is that worth $190,000, does he have any prior experience doing this? Does he bring anything special to this relationship? Is he just able to do this because he’s her dad?”

Jamie doesn’t have the best track record when it comes to his own finances.

In her 2008 memoir Through the Storm, Britney’s mum Lynne said the family was “in the gutter financially, owing more than we were earning,” when the fledgling pop star auditioned for her record label Jive in 1997.

Then just months before she released her chart-topping debut single Baby One More Time in 1998, the Spears family filed for bankruptcy, closing their Total Fitness spa/gym and having their car repossessed.

More recently, her fans in the Free Britney movement, fighting to have the conservatorship removed, have suggested there is a conflict of interest with Jamie in charge.

He had the joint role of protecting Britney but also a vested interest in her continuing to work.

That led to uncomfortable scenes in which she performed one concert during her Vegas residency while complaining on stage that she had a high fever and felt like she was going to “pass out”.

However, while it is a huge step forward for Britney that her dad has agreed to step down as her conservator, several other people are still profiting off the arrangement.

A series of attorneys have billed her estate, including her court-appointed lawyer Sam Ingham. He charged £7,200 a week until he resigned last month due to public pressure.

A professional conservator Jodi Montgomery, who became part of the arrangement in 2019, charged £160,000 for four months’ work, according to court documents.

Since the start of 2019, Britney has refused to work in protest — telling a Los Angeles court in June: “I just want my life back.”

And many fans have snubbed her merchandise or records in a defiant sign they do not agree with what is going on.

But Jamie’s decision to step down means one of music’s biggest stars could finally be able to build her career once again.
Share