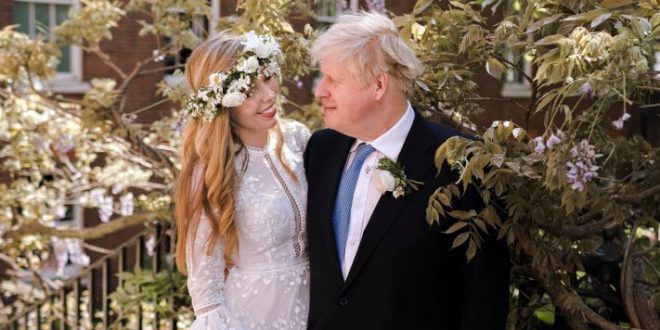 The Prime Minister and his wife welcomed their second child earlier today. Mr Johnson was present throughout the birth.

Boris Johnson and his wife Carrie have announced the birth of their baby daughter.
The couple, who tied the knot in May, already have a young son Wilfred, who was born last year.

A spokeswoman for the couple said: “The Prime Minister and Mrs Johnson are delighted to announce the birth of a healthy baby girl at a London hospital earlier today.

“Both mother and daughter are doing very well.

“The couple would like to thank the brilliant NHS maternity team for all their care and support.”

Labour leader Keir Starmer congratulated the couple. He tweeted: “Congratulations to Carrie and Boris Johnson on the birth of their daughter.

“Wishing your family health and happiness.”

The Prime Minister was present throughout the birth, the PA news agency understands.

Mr Johnson has always refused to talk about his private life despite years of speculation about how many children he has.

In September, he finally appeared to confirm that he had six children in an interview on a trip to New York.

Asked by NBC’s Today show if he has six children, the Prime Minister replied: “Yes”.

Mr Johnson has seven children who are public knowledge: Lara, Milo, Cassia and Theodore with ex-wife Marina Wheeler; Stephanie after an affair in 2009; and Wilfred and the new baby girl with Carrie.

The good news for the couple comes after a torrid week for the Prime Minister as he faced mounting scrutiny over rule-breaking parties in Downing Street last year.

The statement also came moments after the elections watchdog announced that the Tories had been fined more than £17,000 over the lavish refurbishment of the couple’s Downing Street flat