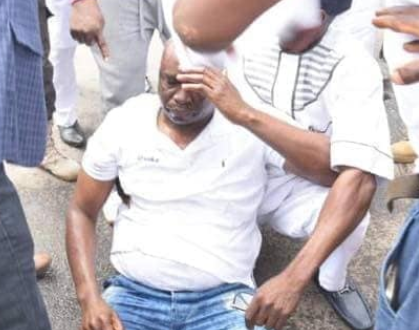 Reports reaching our news-desk has it that, governor of Ekiti state, Mr. Ayodele Fayose lost consciousness today after policemen reportedly fired teargas into the government house in Ado-Ekiti, the state capital.

He was taken to the state house clinic where doctors attended to him.

A combined team of security operatives from the Department of State Services (DSS) and Nigeria Police Force, has laid siege to the Ekiti state government house.

A rally scheduled to take place at the new Pavilion located at Fajuyi, which was within the vicinity of the Government House was botched as policemen teargased the participants .

The policemen were shooting sporadically into the air as they dispersed the PDP members who were called by Fayose to rally support for Prof Kolapo Olusola..

As at the time of filing this report, no human and vehicular movement was allowed from the Fajuyi end into the Government House.

The PDP members had massed at the new pavilion when policemen swooped on them and dispersed the gathering.

Those affected fled in different directions to prevent being arrested by police.