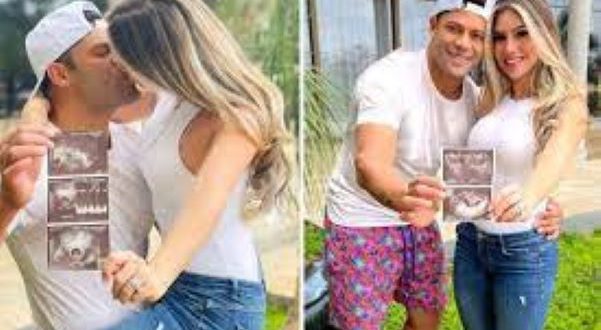 Former Brazil international and Atletico Mineiro star Hulk has celebrated the birth of his first child with the niece of his ex-wife, Camila Angelo, who he married in September 2020

Brazilian football star Hulk is celebrating the arrival of his first child with the niece of his ex-wife.

Camila Angelo gave birth to daughter Zaya at a hospital in Miami where the couple own a luxury apartment. The 35-year-old was given permission by his club Atletico Mineiro to miss Sunday’s match against Coritiba so he could be present at the birth. Overnight the striker called Zaya his “princess” and promised to “love and protect” her for ever in a moving message announcing he had become a father again.

Hulk, who already has three children with his former wife Iran Angelo, wrote on Instagram alongside photos of him holding his tiny daughter in his arms and with his second wife Camila moments after the birth: “Our little Zaya was born under the blessing of God Our Almighty Father.

“Zaya means enlightened, luck, flower that blossoms and she comes to bring light and illuminate our lives more. Come blossom our home my love. We’ve dreamed about your arrival for a long time. Happy to be able to experience the grace of the promises of God. Thank you God for my family that I will honour and love for ever.”

In a direct message to the baby girl, he added: “You are an answer to our prayers, daughter, you came to make our life even more beautiful. You are our blessing. Welcome my princess, I will love and protect you for ever. Hulk, your father”.

The soccer star identified the hospital where Camila gave birth in his social media post, Mercy Hospital in Coconut Grove, Miami, which is Miami-Dade County’s only Catholic hospital. In an Instagram story he posted a photo of Zaya’s birth card with the time of her birth as well as her size and weight and even the name of the gynaecologist who delivered her. It showed she was born at 2:22pm Florida-time on Monday – 7:22pm in the UK – and weighed 8lbs 9oz.

Camila also revealed her happiness on her own social media, posting an adorable photo of her and her footballer husband cuddling their daughter moments after her birth and writing: “Welcome Zaya.” Hulk, who is still scoring around a goal a game despite being in the latter stages of his career, flew to the States at the weekend on his private jet to accompany Camila as she counted down the final hours to the arrival of their first daughter at their fabulous apartment in a luxury Miami condominium.

The 32-year-old model has joint American-Brazilian nationality. Hulk, full name Givanildo Vieira de Sousa, had already described himself as a dad-of-four on his social media profiles before the birth, listing Zaya as one of his kids after his three with his ex – Ian, Tiago and Alice.

He and Camila revealed they were expecting their first child together in an Instagram post last September which included footage of them kissing and photos of them holding up ultrasound scan photos. The Brazilian footballer reportedly broke the news of their relationship with his family in December 2019 while he was still at Chinese club Shanghai SIPG.

Hulk and Camila married in September 2020 following his split from the mother of his two sons and daughter. Iran accused her 32-year-old niece of “cutting her flesh like a knife” last October shortly after she announced she was expecting. The footballer, who acquired his nickname due to his likeness to Incredible Hulk actor Lou Ferrigno, returned to Brazil at the start of last year, signing a two-year deal with Atletico Mineiro.

He has since gone on to sign another two-year contract which will keep him at the club until at least December 2024 when he will be 34, although he will automatically stay on another 12 months if he plays enough games in his last year. Hulk’s partnership with former Chelsea frontman Diego Costa was key to Atletico Mineiro winning their first Brazilian Serie A title for 50 years.

Camila, who late last month showed off her punishing gym routine with her prominent baby bump, had counted down the hours to the birth of her first child by treating fans to a photo of her kissing the footballer with her belly exposed on the terrace of their Miami home.

She wrote along the snap ‘Falta poco’ – Portuguese for ‘Not long to go.’” Keep-fit fanatic Hulk was still working out at the gym to keep in shape for top-flight football in the hours before Zaya’s birth. The footballer’s happiness at the birth contrasted with the pain felt by Ronaldo and his partner Georgina Rodriguez.

They revealed in a heartbreaking statement on Monday night their baby boy had passed away during birth. The couple announced in the same statement their baby girl had survived. The heart-wrenching post said: “’It is with our deepest sadness we have to announce that our baby boy has passed away. It is the greatest pain that any parents can feel.

“Only the birth of our baby girl gives us the strength to live this moment with some hope and happiness. We would like to thank the doctors and nurses for all their expert care and support. We are all devastated at this loss and we kindly ask for privacy at this very difficult time. Our baby boy, you are our angel. We will always love you.”

Charles Igbinidu is a Public Relations practitioner in Lagos, Nigeria
@https://twitter.com/ionigeria
Previous 7 Killed In Taraba Bomb Explosion
Next Biden, 79, ‘has told Obama he IS running again in 2024’ despite concerns over his age