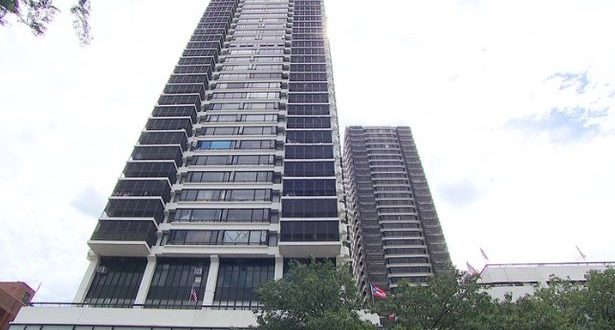 Witnesses in Harlem, New York City, heard the boy’s mother scream “My baby, my baby” as he fell and landed on fifth-floor scaffolding of a high rise

A three-year-old boy has died after falling from a 29th-floor balcony of a high-rise apartment block on Saturday.

The youngster tumbled from the ledge and onto scaffolding on the fifth floor of the building in Harlem, New York City.

The boy was rushed to hospital but pronounced dead there, approximately just 20 minutes after the fall.

Preliminary reports are that the child’s fall was accidental, police said.

“We just started looking and everybody started coming out of their building.”

“Everybody that were upstairs that could see down, saw the little boy with the yellow shirt. He was flat in the scaffolding.”

The boy’s father desperately tried to reach the scaffolding but was unable to do so, reports claim.

Alexander Townsend, 25 and who lives in the block, said: “She (the boy’s mother) was sitting on the ground in her socks. She was screaming, ‘My baby, my baby, he is up there.”

Police continue to investigate the circumstances surrounding the tragedy, which happened in the diverse neighbourhood at around 11.10am.

Emergency services dashed to the scene but the youngster couldn’t be saved ( Image: Twitter)

One resident of the apartment building said she heard “a big fight” between adults coming from the 29th-story balcony less than 10 minutes before the child fell.

Nidia Cordero, 58, added: “When you look out the terrace you see the baby’s body. He was in his diapers and T-shirt.

“Then you hear screams. I think the mum was screaming and I looked and the baby was in the scaffolding.

“He was a beautiful little boy.”

New York Police Department said: “The investigation is continuing” but wouldn’t comment further at this stage.