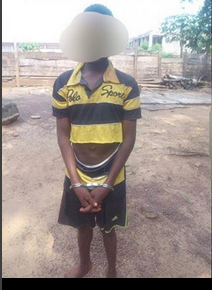 A 17-old boy identified as Emmanuel Gyan, has been arrested for allegedly killing his mother over a missing memory card at Wassa in the Western Region, Ghana.

The accused, allegedly accused the mother of taking his memory card and subsequently confronted her on the missing item. The deceased, Faustina Agyeiwaa, 52, denied any knowledge of the missing memory card but Emmanuel wouldn’t take the mother’s plea.

According to Wassa Police, Isaac became furious over the matter and attacked the mother with a pestle, hitting her on the head several times.

Not satisfied with the beatings, Emmanuel removed firewood from a nearby fire, burned the mother with it until she succumbed to the injuries and died on the spot