Home / News / Local News / I Bought My Gun For Cultism, Not Robbery – Suspect 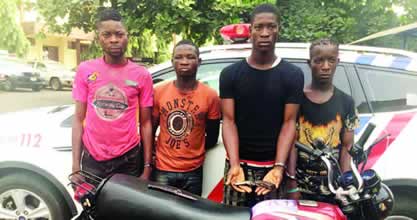 I Bought My Gun For Cultism, Not Robbery – Suspect

A suspect, Ridwan Omole, has denied allegations of robbery against him by the police, saying he is only a cult member.

The suspect, however, said he always shared loot with a robbery gang each time they had a successful operation.

The 21-year-old spoke in a statement he made to operatives of the Rapid Response Squad of the Lagos State Police Command.

According to the police, a three-man robbery gang consisting of one Taiwo Lawal (23), Kabiru Ajiboye (24) and Seyi Ayetoba (27), had been arrested on Thursday during a botched operation in the Somolu area of Lagos State.

The men were about attacking a motorcycle rider and his passenger in the area when their intending victims raised the alarm.

They were reportedly chased and apprehended by some residents who handed them over to a patrol team of the RRS.

The suspects were said to have confessed to the police that the gun with them belonged to Omole.

He was then arrested in his parents’ house in the Ajah area.

Omole, who allegedly confessed to be a member of the Aiye Confraternity, said he bought the gun from a former schoolmate for self-defence.

He said, “I bought the gun from a former schoolmate for N9,000. I bought it in September 2017. I got the gun because of rival cult members who were disturbing me in my street. They knew I belonged to Aiye Confraternity and wanted me to join their camp.

“Because my friend, Ayetoba, knew that I had a gun at home, he usually came to borrow it. He later requested that I follow him for a job. I asked him the nature of the business and he said robbery and okada snatching. I told him that I couldn’t do such a thing.

“However, whenever he borrowed the gun and went out for an operation, he returned to give me money. On three occasions, he had given me money. First, he gave me N10,000; the second time was N10,000 and an Android phone; and the third was N2,000. He said that operation wasn’t smooth.”

Ayetoba, who was the leader of the gang, said he was initiated into robbery by one Tunde, whom he met in the Mushin area of Lagos.

“Tunde was the leader of my previous gang. Whatever we stole, we sold in Mushin. It was Tunde who taught me all the tricks I used during operations. He was arrested sometime last year. I didn’t go out with him that day.

“I formed my own gang with Taiwo (Lawal) and Kabiru (Ajiboye) and took the gun from Ridwan (Omole). Each time we went on an operation, I paid him for hiring the gun from him. We live on the same street and belong to the same confraternity.

“The areas where we have operated included Ajah, Costain, Onipanu, Yaba, and the National Stadium. We sold stolen motorcycles for between N30,000 N60,000,” he said.

The RRS said it recovered from the gang a locally-made pistol with a 9mm live cartridge and a jackknife.

The Police Public Relations Officer, SP Chike Oti, said the suspects were cooperating with the police, adding that the state Commissioner of Police, Edgal Imohimi, lauded the participation of members of the community in the arrest.

“The case has been transferred to the Federal Special Anti-Robbery Squad for further investigation,” he added.

Previous Labourer Machetes His Boss, Steals Coworkers’ Salary
Next 30-Year-Old Teacher Had Sex With Her Student 17 In Class