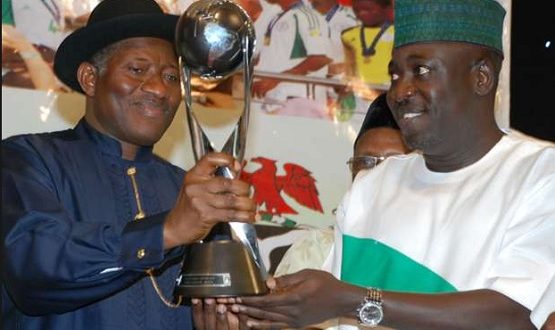 APC spokesperson, Abdullahi, to unveil book on Jonathan
The National Public­ity Secretary of the ruling All Progres­sives Congress (APC), Mallam Bolaji Abdulahi is set to launch his account on the administration of former President, Good­luck Jonathan in Novem­ber.

Titled “On a Platter of Gold”, the book, accord­ing to the author, gives a definitive account of the Goodluck Jonathan presi­dency.

Bolaji Abdullahi, a for­mer Minister in the Jona­than cabinet, noted that the book also gives de­tailed and largely exclusive account of the making and the unmaking of the Jona­than presidency, adding that it will also revealing for the first time, some of the intrigues that surrounded the 2015 presidential elec­tion and its aftermath.

“On a Platter of Gold is a historical and politi­cal thriller, which answers many of the often-asked questions about Jonathan’s incredible rise to the high­est political office in the land and his unprecedent­ed electoral defeat in 2015.

“The book, which has the subtitle, “How Jona­than Won and Lost Nigeria is introduced as follows: “Was Goodluck Jonathan weak and clueless, as his traducers have claimed? Or – as his supporters have alleged – was he just a vic­tim of vicious conspiracies by an entitled cabal that would stop at nothing to bring down this ‘intruder’ to power?

“From an unknown uni­versity teacher, Goodluck Jonathan rose to become President of Africa’s largest democracy, in less than a decade -most astonishing­ly, without winning a single vote in his name. In con­testing the 2011 presiden­tial election, he declared that growing up as the son of a fisherman in the creeks of Nigeria’s Niger Delta, he had no shoes. This message resonated with millions of Nigerians. “If I can make it, then you can as well,” he had declared. He went on to win with the highest majority vote ever record­ed in the nation’s history.”

Previous Michigan Teen Kills His Mother After She Told Him ‘He Couldn’t Keep A Puppy In Their Home’
Next Soldiers Attack Journalists In Umuahia, Destroy Properties