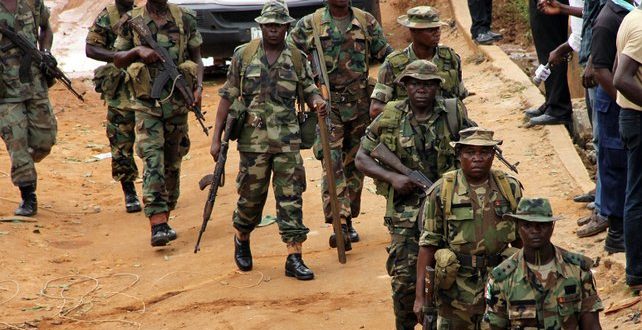 The Nigerian Army on Wednesday said there was no cause for alarm in Maiduguri after hours of shootings in the city.

The gunshots were heard in the outskirts of the town in the evening, resulting in panic around Damboa Road, Old G.R.A.

But Lt.-Col. Kinsley Samuel, the Deputy Director, Army Public Relations Department, said that the situation was under control.

“The situation in Maiduguri is under control. The public is requested not to panic but to stay calm.

“The press is pleased requested to disseminate this information to the public.”

Twitter posts by residents  confirmed that calm has been restored to the city.

Aid workers had reported explosions and heavy gunfire for at least 45 minutes in the southeastern and southwestern outskirts of the city.

Fighter jets roared overhead as soldiers and police sped toward the scene. Three children were hit by bullets, one witness said.

Thousands of civilians fled the fighting, according to some other witnesses.

Also announcing the elimination of the armed terrorists from Jiddari Polo community in Maiduguri, the Army Spokesperson, Brigadier Sani Kukasheka Usman said: “there was an attempt by a few suspected Boko Haram to attack Jiddari Polo and all have been neutralized. Situation cool and calm.”

Residents of the area who had planned to flee their homes were reassured with rapid response of Nigerian troops.

There is heavy security presence as the residents of the community were asked not to panic as the situation is under control.

Maiduguri has been the epicenter of the eight-year fight against Boko Haram but has been relatively free of violence since the beginning of 2016, barring sporadic suicide bombs on its outskirts.