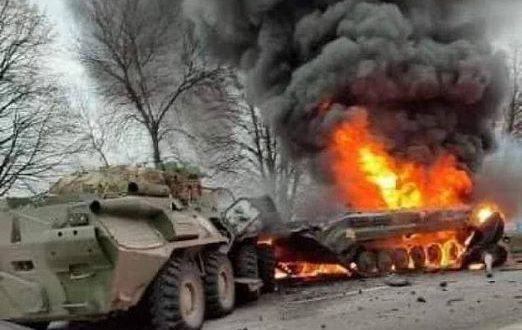 CORPSES of dead Russian soldiers are being secretly taken back to Russia via Belarus in special planes, trains, and buses to avoid attracting attention, sources have claimed.

Passengers at a train station in Belarus were reportedly “shocked” at the number of corpses being loaded up, while hospital staff have warned of “overflowing” morgues.

Video purports to show a convoy of Russian buses with the ‘V’ sign on the side for carrying corpses through the Belarusian city of Homel.

The ‘V’ symbol has been used to refer to Belarus on other Russian military vehicles.

A separate graphic video appears to show a railway carriage filled with bodies in Russian uniforms wrapped in plastic.

News agency Radio Free Europe/Radio Liberty, which shared the video, claimed many of the bodies belonged to Russian soldiers as young as 20.

The carriage was stopped in the city of Voznesensk north of Mykolaiv in southern Ukraine.

Voznesensk was the scene of fierce fighting this month due to its strategic importance as a majority Russian-speaking city close to Ukraine’s second-biggest nuclear power plant.

Video filmed in Homel shows a convoy of military ambulances driving through the city in early March.

Meanwhile, employees at the region’s clinical hospital claim that the bodies of more than 2,500 Russian soldiers have already been shipped back to Russia.

Ukraine’s military says that more than 14,000 Kremlin troops have been killed since the start of the Russian invasion on February 24.

One US intelligence expert puts the death toll at around 7,000 but says a further 20,000 may have been wounded.

Moscow’s Defence Ministry, on the other hand, claims the number of dead is less than 500.

Medical staff in Homel have described “overflowing” morgues in the city less than 20 miles from the Ukraine-Belarus border.

A resident of the Belarusian city of Mazyr claimed passengers at the train station had been left “shocked by the number of corpses being loaded onto the train”.

They went on: “After people started shooting video, the military caught them and ordered them to remove it.”

“There are not enough surgeons,” a doctor at Mazyr’s main hospital warned. “Earlier, the corpses were transported by ambulances and loaded on Russian trains.

“After someone made a video about it and it went on the internet, the bodies were loaded at night so as not to attract attention.”

Officials at a hospital in Homel are alleged to have begun discharging patients as early as March 1 due to the sheer number of wounded Russian soldiers.

A patient said: “There are so many wounded Russians there – it’s just a horror. Terribly disfigured.

“It is impossible to listen to their moans throughout the whole hospital.”

Homel is Belarus’ largest city after the capital Minsk.

The country’s dictator Alexander Lukashenko is a prominent Putin supporter and has allowed Russian troops to be deployed across the country.

It comes as a UK military expert claims Russian troop morale is collapsing in the face of heavy casualties and logistical nightmares.

Professor Michael Clarke, former director of the Royal United Services Institute think tank said on Thursday: “The Russians are making almost every tactical mistake it is possible to make.”

This week, five paras from the 331st Guards Parachute Assault Regiment — considered the toughest in the Russian military — were killed, including one of Vladimir Putin’s top commanders.

Morale among his troops has collapsed with some now shooting themselves to avoid being sent to the front line.

Putin is becoming so desperate he is recruiting mercenaries and private contractors to boost his depleted forces.

Prof Clarke said: “The Ukrainians are stalling the Russian advance in all areas and operating quite effective counter-attacks. The Russians are losing a lot of equipment and troops.”

Today, Ukraine claimed a fifth top Russian general had been killed in the fighting, hollowing out Putin’s forces of elite commanders.

Lieutenant-General Andrei Mordvichev, commander of the 8th Combined Arms Army, died in fighting at Chornobaivka, near the southern city of Kherson.

Major-General Oleg Mityaev, 47, was killed in Mariupol on Wednesday, bringing the total number of Russian officers to die since the start of the war to 13.

It comes as Ukraine claimed this morning to have shot down two Russian planes and three helicopters in the past 24 hours.

Lieutenant General Andrei Mordvichev – the commander of the 8th General Army – died during fighting last night in a fresh blow to Vladimir Putin‘s invasion of Ukraine.

It’s thought the military boss was killed in the Russian-controlled Kherson Airport, which has been hit with Ukranian strikes in the past few days.

A statement from the army general staff in Kyiv read: “As a result of fire on the enemy by the Armed Forces of Ukraine, the commander of the 8th All-Military Army of the Southern Military District of the Armed Forces of the Russian Federation, Lieutenant-General Andrey Mordvishev was killed.”

It comes as Ukraine this morning claimed they have hit 12 Russian air targets in the last day.

The armed forces say Russia continues to suffer heavy losses – adding that Russian equipment was destroyed in the Mykolayiv and Sumy regions.

On Wednesday, Major-General Oleg Mityaev, 47, died in the storming of Mariupol, along with seven members of an elite SWAT team.