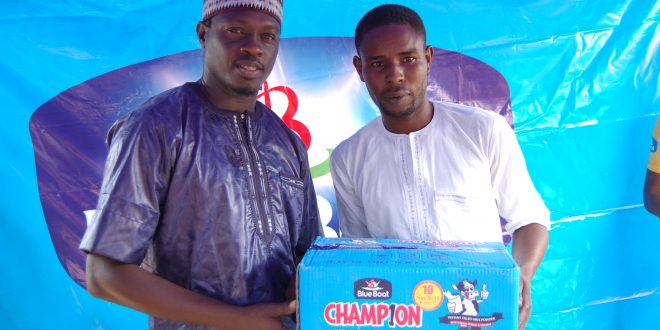 Blue Boat Milk Powder has created unparalleled excitement in some neighbourhoods of Kano. It has commenced a consumer engagement and reward program through which Kano residents can meet and spend quality time with Ali Nuhu, Kannywood’s superstar. Through this program consumers are also being educated on the benefits of drinking milk daily.

Kano residents were overjoyed as most of them were meeting the iconic movie star for the very first time and therefore could not hide their joy and emotions.

Ali Nuhu, actor, producer, director and television personality popularly referred to as the “King of Kannywood”, “Sarki Ali” or “King Ali”, is the Brand Ambassador of Blue Boat Milk Powder. He has appeared in hundreds of Hausa Language and English Language films, and earned numerous accolades.

The consumer activity involves surprise house to house visits by Ali Nuhu in selected neighbourhoods during which he gave them various gifts.

Reacting to the unexpected visits, one of the consumers, Mohammed Wahab said “I was surprised when I saw Ali at my door with Blue Boat Milk. It was a dream come true and I will make ‘yanga’to my friends that I met him face to face”.

Another Blue Boat gift bag recipient, Aisha Abdullahi, thanked Blue Boat Milk powder for providing the platform to meet face to face with Ali Nuhu, the superstar. She commended the brand for the gesture. Blue Boat Milk has educated me on the benefits of taking milk every day and how to prepare it properly. I will use Blue Boat milk for the rest of my life and also introduce it to friends and family”.

According to the Senior Brand Manager of Blue Boat, Foluke Makinde “With this campaign Blue Boat Milk Powder has fulfilled the dream of lots of fans of Ali Nuhu to meet their superstar up close. These consumers will never forget the moment & the brand which made this happen.”

She also revealed that the activation will be taken to other locations in Kano.