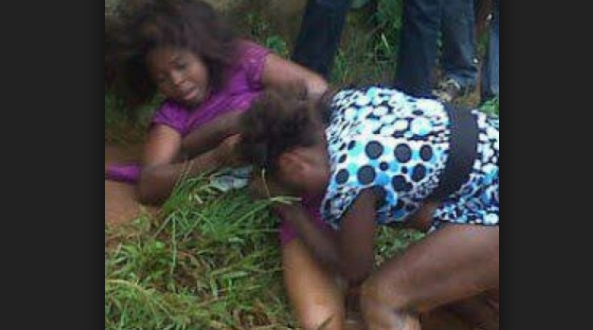 Bloody Fight: Sex Worker Maims Rival As They Battle Over Customer In Lagos

Two sex workers, Miss Judith Ezekiel, 26 and Success John, engaged in a public fight in Lagos over a client who came to their hotel to have short time sex.

It was reported that during the public brawl, Judith went brought a razor blade and sliced Success on her breast and other parts of her body.

The incident happened at a popular hotel in Ijegun area of Lagos State where they operated as ladies of easy virtues.

It was gathered that trouble started after a client visited the hotel for a sex romp and they struggled to win the client which resulted in hot exchange of words between them. In the process, Judith went and got a razor blade and inflicted injuries on Success. The victim, Success, was said to have bled profusely and was rushed to a hospital for treatment.

The matter was reported to the police; Judith was arrested and detained at the police station.

During interrogation, Judith told the police that Success had been luring her clients and once they slept with her, they will not come back to her again.

Judith said that she had warned her severally but she did not listen and continued until the day they fought publicly and she injured her.

On her part, Success denied taking over her customers as they usually positioned themselves for customers to pick any lady they wanted; she said did not force any client to choose her as they usually went for their preferred lady.

However, the police found Judith culpable and charged her before the Ejigbo Magistrates court for the assault and inflicting injury on Success.

She pleaded guilty on the other count charges except one which stated that she used broken bottle to stab Success on her face and breast. She told the court that it was razor blade against the claims of the police.

The prosecutor, Inspector G. Simon, asked the court for a short adjournment to enable him present the facts on the other charges she pleaded guilty.

Thus, the Presiding Magistrate, Mr. L.K.J. Layeni, granted her bail in the sum of N100,000 with two sureties on the offence she pleaded not guilty.

The court adjourned till 12th September, 2018, for facts and sentence. She was remanded in prison custody.

It was gathered that since Judith had pleaded guilty, the court will sentence her accordingly and she will be coming from prison to face trial on the offence she pleaded not guilty for the court to determine her fate.

Previous Depression: Final Year Student Commits Suicide Ahead Carry-over Examination
Next Touching! ‘I Became A Drug Addict After My Husband Was Killed By Boko Haram’