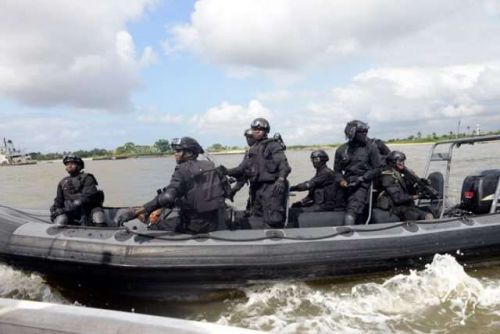 We have blocked escape routes of pipeline vandals in Lagos – Navy

The Nigerian Navy on Friday said it had successfully blocked all escape routes of the pipeline vandals in the Arepo, Ikorodu areas of Lagos.

He said, “We the blocked escape routes toward Ogun State and we are going to sustain this operation and see, where it will lead us.

“The essence of having this blockade by land and water is that when they are running out, we will be able to grab them, profile and investigate them.”

Bobai, who confirmed that there was an ongoing operation at the Arepo area, said the directive for the operation came from the Chief of Defence Staff, Gen. Abayomi Olonishakin.

“The directive came from him, for us to carry out the operation in the Arepo area.

“This is with a view of dismantling the vandals who are scattered in Arepo, Ibafo and Ishawo areas of the state. Initially, we were directed not to use air power.

“But when we carried out an assessment of the area, a lot of the vandals moved from the areas accessible by water and land to areas that were difficult terrain into the swampy areas.

“We had to use the air power, which was granted by the CDS,” he said.

The FOC said the Navy collaborated with Lagos and Ogun governments since the operation was between both territories.

Bobai said other security agencies were participating, stressing that the navy had also employed the Special Boat Services alongside the Directorate of State Services.

He added that the Navy would not only arrest the vandals but would also get at their sponsors.

The FOC, who also spoke about the kidnapped of the monarch of Iba, noted that there were ongoing meetings with the Police to ensure that the Oba was safe, even if he was within the area of operation.