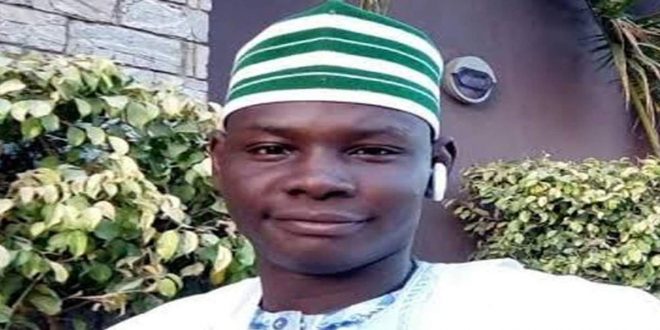 A 22-year-old Musician, Yahaya Sharif-Aminu, who was sentenced to death by an Upper Sharia Court in Kano State on August 10, 2020, has been denied access to lawyers even as the 30-day deadline given to him to appeal the judgment lapses on September 9, Saturday Punch reports.

It was learnt that a notice of appeal had yet to be filed in court even as Kano State Governor, Abdullahi Ganduje, has expressed readiness to sign the convict’s death warrant once the 30-day deadline lapses.

Human rights lawyer, Mr. Femi Falana (SAN), said he had asked a lawyer to meet with Sharif-Aminu but the lawyer was denied access by prison authorities.

He said, “I sent a lawyer to take up the case and meet with him (Sharif-Aminu) but he was denied access.”

Attempts to speak with the Spokesman for the Nigerian Correctional Service, Austin Njoku, proved abortive as he neither responded to repeated calls nor a text message on Friday.

The musician, who is a resident of Sharifai in Kano metropolis, was accused of committing blasphemy against Prophet Mohammed in a song he circulated via WhatsApp in March 2020. Irate youths burnt down his family home and led a protest to the Sharia Police, Hisbah, demanding Sharif Aminu’s death.

The musician, who went into hiding, was arrested, hurriedly tried and convicted for breaching Section 382 (b) of Kano penal code of 2000 which is based on Islamic law.

Some human rights lawyers in Kano were quoted as saying that many lawyers were refusing to take up Sharif-Aminu’s case because of the volatile nature of Kano State.

An activist said, “Most of the human right lawyers in Kano that I have asked to take up the case have refused to do so out of fear. Most of them are afraid that their chambers could be burnt down by youths or they could be attacked or killed for defending a blasphemer. Ironically, some of these lawyers support the death sentence handed down to the convict and are refusing to act.

“And of course, when it comes to such sensitive religious matters, the police are usually complicit or they look the other way. The political leaders also keep mute or come out to support Sharia because they want to remain popular among their people.”

The Muslim Lawyers Association of Nigeria which is highly active in Kano and other states practising Sharia, had recently endorsed the death sentence handed down to the musician, stating that the trial was fair and in line with the laws of the state.

However, global rights group, Amnesty International, had said in a statement that the musician, from all indication, was not given a fair hearing.

“This is a travesty of justice. There are serious concerns about the fairness of his trial; and the framing of the charges against him based on his WhatsApp messages. Furthermore, the imposition of the death penalty following an unfair trial violates the right to life. Yahaya Sharif-Aminu must be released immediately and unconditionally,” said Osai Ojigho, Amnesty International Nigeria country director

On his part, the United States Commission on International Religious Freedom, Commissioner Frederick Davie, was quoted as saying that the USCIRF would be making foreign policy recommendations to President Donald Trump, the Secretary of State, Mike Pompeo; and Congress on Nigeria to deter religious persecution and promote freedom of religion and belief.

On what recommendations the commission would be making as regards the blasphemy case, Davie said, “It is the commission’s opinion that laws criminalising blasphemy are detrimental to religious freedom and are inconsistent with international human rights standards and with Article (Section) 38 of the Nigerian Constitution.

“We recommend that the US government enter into a binding agreement with the Federal Government of Nigeria to address violations of international religious freedom across the country, including by engaging state and local counterparts in a political dialogue to repeal or reform the country’s blasphemy laws to be more in line with the constitution and the Universal Declaration of Human Rights.”