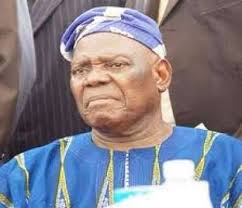 President Muhammadu Buhari has described Chief Bisi Akande, a former interim Chairman of the All Progressives Congress (APC), as a victim of “a diabolical double-cross” by former President Olusegun Obasanjo.

Speaking at the public presentation of a book titled, “My Participations” the biography of Akande, the president said only Asiwaju Bola Tinubu, former governor of Lagos, survived the antics.

Akande was Governor of Osun State between 1999 and 2003 during the first tenure of Obasanjo as President.

During Obasanjo’s second term, all AD Governors in the South-West except Asiwaju Bola Tinubu failed to win re-election amidst the incursion of the Peoples Democratic Party (PDP) into the geopolitical zone.

While reflecting on the political history of the author, particularly his bid to seek a second term as Governor of Osun, Buhari said, “It is common knowledge that Akande was the victim – along with other AD Governors – of a diabolical double-cross which ended his gubernatorial career. Only the steadfast Asiwaju Bola Tinubu escaped the electoral massacre masterminded by President Obasanjo,”

He also described Akande as a truthful and ‘perfect public officer’ and the type of person he could go into the jungle with.

He added that the author has retained his ‘inflexible integrity,’ in and out of public office, never accepting or offering bribes.

He quoted a part  of page 400 of the book where Akande wrote that he ‘never gave to or demanded bribe from anyone all his life’; while he emphasized that he was a perfect gentleman and public officer.

Charles Igbinidu is a Public Relations practitioner in Lagos, Nigeria
@https://twitter.com/ionigeria
Previous Katsina Commissioner of Science and Technology Rabe Nasir killed
Next Tiger Woods to return to action alongside his son, Charlie, at the PNC Championship this month