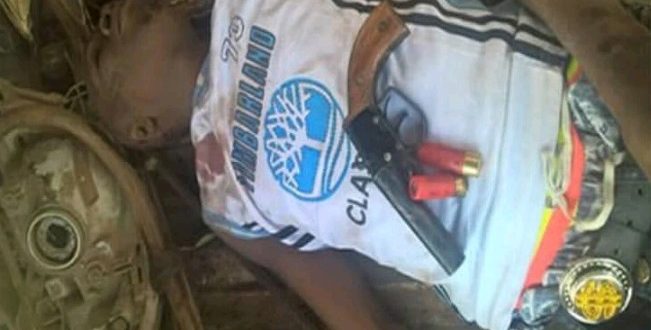 A bike snatcher met his Waterloo on Saturday when he fell into a ditch and hit his head on a concrete culvert while trying to escape after snatching a motorcycle from its owner, whom he also shot in Ogun State.

The state Police Public Relations Officer, Abimbola Oyeyemi, said: “the armed robber, who pretended to be a passenger, boarded the motorcycle, but suddenly brought out a locally-made double-barreled pistol and asked the rider, Toyin Ayoade, to surrender his bike.

While the rider was struggling with him, he shot him on the hand and took possession of the motorcycle. A distress call was made, which the people of the community to give the suspect hot chase.

But as he was running away with the bike, he fell into a ditch and hit his head on a concrete culvert. He died on the spot.” Oyeyemi said that a locally-made double-barreled pistol, two live cartridges and the snatched motorcycle were recovered from the dead suspect.

He added that the victim had been taken to the hospital and was responding to treatment.