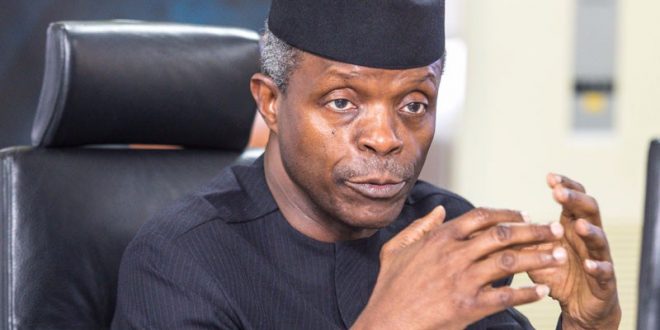 In robust rejection of bigotry allegation, the office of the Vice President Yemi Osinbajo has released a video displaying his Muslim aides and associates.

The video was released after a professor of journalism in the US, Farooq Kperogi, had in a piece accused the vice president of religious bigotry.

In the video released on Wednesday, the 16 aides spoke about their positions, states of origin and the duration of their work in the office of the vice president.

But responding, Kperogi insisted that Osinbajo was only interested in advancing interest of members of his church, arguing that it was Buhari who appointed the Muslims in the video.

“Several of them are embarrassed by it—the same way that I’ve been embarrassed by Buhari’s favoritism toward northern Muslims. So, please don’t understand me as demonizing the RCCG, which I believe is a great spiritual sanctuary and source of hope for many.”

“Now, let’s get started with empirical facts and end with a conceptual wrap-up of what Osinbajo’s bigotry represents, which is scarier than the facts. Osinbajo’s deceitful parade of a little over a dozen Muslims who work in his office (which includes at least two that no longer work there and several that were appointed directly by Buhari or the Presidency) is a poor attempt to paper over his vast record of deliberate, religiously inspired exclusion of Nigerians who don’t worship at his church.

“But it gets even more interesting. Osinbajo’s predecessor at Olive Tree Parish is pastor Olukayode Pitan. He is said to be the pioneer pastor of the parish. He pastored there from 1995 until 2009 or thereabouts when he handed over to Osinbajo.

“Well, Osinbajo made him MD/CEO of the Bank of Industry (of course with the later approval of Buhari who had no clue what was going on) when he was acting president. That’s 4 pastors from the same RCCG parish!”

Charles Igbinidu is a Public Relations practitioner in Lagos, Nigeria
@https://twitter.com/ionigeria
Previous Hoodlums, numbering over 30 disrupt court proceedings in Bayelsa
Next Russia threatens to send nuclear weapons to the Baltic Sea, warns of ‘the most undesirable consequences’ if Finland and Sweden join NATO