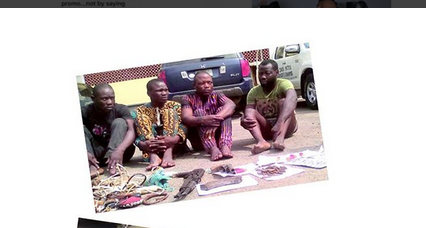 The Lagos State Police Command has smashed a notorious trans-border robbery gang, whose members come from the Benin Republic to snatch exotic cars from Nigerian motorists and take same to Cotonou.

Arrested were four members of the gang, including a herbalist who confessed to be preparing charms for the gang. Three members of the gang— Ajagba Hammaed, 30; Tobinju Potel, 35, and Botan Remmy, 30— were arrested along the Mile-2/Badagry Expressway while on a mission to snatch vehicles in Lagos State.

The gang members had been operating in Lagos State for close to two years. One of its operations was carried out at Ajose Adeogun, V.I Lagos, on January 20, where they snatched a Prado Jeep from one Olayinka Oyebola.

Oyebola had gone to withdraw some money from an ATM. When he was through with the withdrawal, he entered his car but before he could drive off, the criminals who had been stalking him, intercepted him.

They forced him out of the driver’s seat and dragged him to the rear of the car. He was dispossessed of his phone, laptop and N45,000. The gang also stripped him naked and drove him to Ajah/Epe Road, where he was thrown out of the car.

Same day, the trio drove to Ikoyi area where they parked the stolen jeep beside another Prado jeep belonging to one Engr. Fidel Onwodi, who was with his wife buying suya.

They were ordered at gunpoint to sit at the rear as the gunmen drove off with them. However on the way, Onwudi’s wife jumped out of the moving car, while the robbers continued the journey to the Third Mainland Bridge, where they dropped off her husband.

They went away with Engr. Onwodi’s jeep, but abandoned the first one at Babatunde Cresent, Oniru area of Victoria Island, where it was recovered by operatives.

Previous Yobe Boko Haram Attack: 94 Students Missing
Next Woman Burns Down Her Home After Losing It In Her Divorce