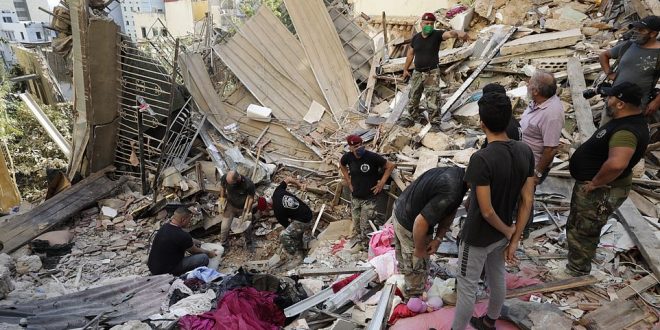 Lebanese soldiers picked through the rubble of buildings for bodies, with the death toll expected to rise further

Beirut’s Explosion caused by a welder’s sparked that ignited 2,700 tons of explosive chemicals ‘seized from a ship’

Rescue workers in Lebanon are searching for more  than a hundred people who are missing after a huge explosion devastated the port area of the capital Beirut on Tuesday.

The blast killed at least 100 people and injured more than 4,000 others.

The whole city was shaken by the explosion and a mushroom cloud could be seen spreading over the port area.

President Michel Aoun said the blast was caused by 2,750 tonnes of ammonium nitrate stored unsafely in a warehouse.

It has been revealed that port authorities repeatedly warned of the dangers of storing the ammonium nitrate without safety measures, saying it was enough to ‘blow up the whole of Beirut’

Court documents revealed customs officials had applied at least six times starting in 2014 for the chemicals to be removed, but all of their requests were turned down

The explosion was said to have been caused by a welder’s sparked that ignited the 2,700 tons of explosive chemicals

Ammonium nitrate is used as a fertiliser in agriculture and as an explosive.

President Aoun declared three days of mourning which started on Wednesday. Opening an emergency cabinet meeting, he said: “No words can describe the horror that has hit Beirut last night, turning it into a disaster-stricken city”.

“Amid last night’s smoke, flames and destruction, I would like to laud the zeal of the Lebanese who rushed to the blast location and perimeter and the hospitals to offer support and assistance,” he added.

Eyewitness Hadi Nasrallah says that he saw the fire but did not expect the blast. “I lost my hearing for a few seconds, I knew something was wrong, and then suddenly the glass just shattered all over the car, the cars around us, the shops, the stores, the buildings. Just glass going down from all over the building,” he told the BBC.