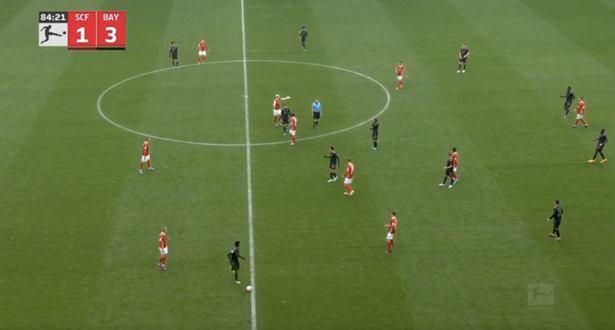 Bayern had 12 men on the pitch for around nine seconds

Bayern Munich could face punishment from German football authorities after playing part of their Bundesliga match against Freiburg with 12 men on Saturday.

The Bavarians were a man up for around nine seconds late in the game, as they ran out 4-1 winners to stay comfortably top of the table.

But Saturday’s victory has quickly become shrouded in controversy after a mix-up with their substitutes. In the 85th minute, manager Julian Nagelsmann sent on Niklas Sule and Marcel Sabitzer to see out the game.

But instead of two players coming off in their place, only Corentin Tolisso did, with Kingsley Coman mistakenly remaining on the pitch. That was to the almost immediate dismay of the opposition, who alerted the referee to stop the match seconds after play had resumed at the Europa-Park Stadion.

“We drew the referee’s attention to the fact that Bayern had eleven outfield players on the pitch,” Freiburg director Jochen Saier told Sky. “That was bizarre, I haven’t seen that before.”

His club would, however, need to lodge a formal complaint for there to be repercussions for Bayern, who currently sit nine points clear of second-place Borussia Dortmund.https://imasdk.googleapis.com/js/core/bridge3.508.0_en.html#goog_2016468288Nagelsmann hopeful of bright Gnabry future at Bayern – This video will start in0:04https://get-latest.convrse.media/?url=https%3A%2F%2Fwww.mirror.co.uk%2Fsport%2Ffootball%2Fnews%2Fbayern-munich-bundesliga-12-men-26620610&cre=center&cip=8&view=web

Referee Christian Dingert noted the bizarre incident in his report and the official stated: “Now the DFB (the German Football Association) must decide.” Nagelsmann attempted to explain the predicament and insisted that the nine seconds in which his team had an advantage were insignificant to the final outcome.

“There was the bizarre situation,” the 34-year-old coaching prodigy added. “The fourth official showed the wrong number and Kingsley Coman didn’t know he had to go off. Nothing decisive happened.” German newspaper Sport Bild, via Marca, have suggested that the win could be deducted from the Bavarians’ tally, with a possible further points deduction.

Charles Igbinidu is a Public Relations practitioner in Lagos, Nigeria
@https://twitter.com/ionigeria
Previous Vladimir Putin could be ousted in a ‘palace coup’ by his cronies within TWO YEARS, says intel analysts
Next Suspended Chief Imam Nuru Khalid says he is unperturbed, vows to continue speaking the truth