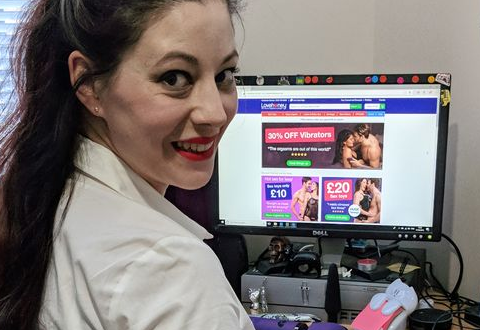 A 37-year-old banker has given up her high powered job in finance to become a professional sex toy tester.

Cara Douglas had been earning £60,000 as a wealth management expert but after becoming bored at work she decided to quit and instead started reviewing vibrators , lubricants and other aids for adult retail companies.

According to MirrorOnline, the woman  says she is now earning £30,000 a year from her new career testing out the toys with her fiancé, IT consultant Darren, who she has been dating for eight years.

She said: “I am earning half what I was in banking but I am having twice as much fun. I hated being a banker and now I get paid for doing something I feel really passionate about.

“I have always loved sex toys so I am very lucky to have made a career out of what was my hobby having 20 orgasms a week reviewing toys.

“I often have to review couples’ toys with Darren. Obviously that is fun to do but you have to maintain your professionalism and work out what aspects of the product work well and what don’t.

“Overall I would say that my job enhances our sex life. Sex is like a muscle – the more you use it, the more active it is.”

Miss Douglas’ job is well known to mothers on the school run where her children are educated – and some ask her for tips on how to spice up their sex lives.

She said: “Most of the mums have their own sex toys anyway. They are so popular these days, particularly since the explosion of interest sparked by Fifty Shades of Grey.