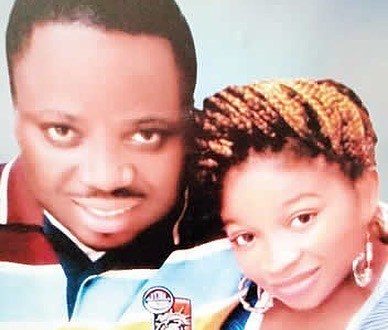 Banker Arrested For Torturing His Wife To Death In Lagos

A 32-year-old bank worker, identified as Olaoluwa Adejo, has been arrested for the death of his 28-year-old wife, Maureen, at their home on Peluola Street, Oworonshoki, Bariga, Lagos State, Punchng reports.
Olaoluwa was alleged to have tortured his wife of five years with a belt, as well as cutting her with a machete. Their 5-year-old son, Richard, who witnessed the incident, told Punchng that his father also forced a local insecticide, otapiapia, down the throat of his mother.

My daddy said my mummy should get out of the house. My mummy said no. In the night, my daddy woke my mummy up and said, ‘Mosquito is too much, let me go and buy otapiapia’. My daddy forced my mummy to drink it. She shook her head. She vomited.

My daddy slapped my mummy. My mummy did not do anything to him. My daddy gave her one blow. My daddy kicked her. Small blood came out.

My daddy slapped her, kicked her, machete her, blow her, and put otapiapia in her mouth and in the food,” Richard said.

The victim’s mother, Mrs. Kate Jonathan, explained that her daughter had packed out of her matrimonial house five days to the incident and was living with her when she decided to return for a party at the children’s school. She said she never returned alive.

She said she reported the case at the Station, where she was told that the suspect had already reported that his wife committed suicide by taking local insecticide, Sniper.

It was gathered that Olaoluwa had already deposited the body of his wife in the Gbagada General Hospital mortuary and had allegedly gone to obtain court documents to enable him to bury her, before he was arrested.

The victim’s mother, Jonathan, who claimed to have visited the mortuary, said Maureen’s body had machete cuts and other torture marks. The Police Public Relations Officer, SP Chike Oti, said investigations were ongoing into the incident.