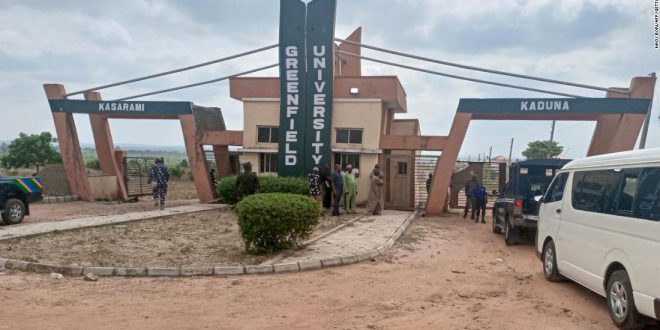 A general view of the gate of the Greenfield University in Kaduna, Nigeria, on April 21, 2021. - Gunmen have attacked a private university in Nigeria's northern Kaduna state, killing one staff member and kidnapping some students, police and officials said on April 21, 2021. It was not immediately clear how many students had been abducted from Greenfield University during the April 20, 2021 attack at night and one official said they were still conducting a headcount. (Photo by NASU BORI / AFP) (Photo by NASU BORI/AFP via Getty Images)

Two more students of Greenfield University, Kaduna, have been killed by their captors.

In a statement on Monday, the Kaduna State Government said security agencies had recovered two more corpses of students of the university and evacuated them to a mortuary.

“The retrieved corpses have been evacuated to a mortuary, and the university has been notified of the development.”

He said Governor Nasir El-Rufai is saddened by what he described as evil perpetrated against innocent students abducted while pursuing their education for a glorious future.

“The Government sends its deep empathy to their families and the university management, and prays for the repose of their souls,” he stated.

The bandits had demanded N800 million for the release of the students.

Some parents had told our correspondent that the bandits had threatened to kill two or more students after every three days.

The bandits had stormed the university last week Tuesday and evacuated a yet-to-be-confirmed number of students and staff.

The bandits had also killed a security guard at the institution before evacuating what sources described as half the student population.

The school had on Friday begged the bandits to spare the lives of the students and staff while calling on the government and other Nigerians to come to its aid.

Greenfield University was established along the Kaduna-Abuja highway in 2019.