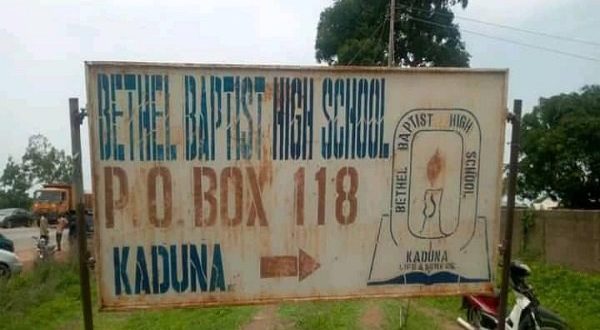 The abductors of Bethel Baptist Church High School students, Kaduna, have confirmed that there are 121 students in their custody.

President Kaduna Baptist Conference and Proprietor of Bethel Baptist High school, Kaduna Rev. Yahaya Adamu Jangado, disclosed this to newsmen on Tuesday.
He said the bandits informed the school that the students are in good condition.

According to him, they also spoke with the students in captivity who confirmed that number given by the bandits.

“Today (Tuesday) by the grace of God we had a call from the bandits and they assured us that our children are well and doing okay.”

“In fact, we had the privilege of speaking with a few of them. They counted themselves in the jungle and they gave us information that they are 121 and when we put the number together with what we have recovered, we discovered that the number is exactly the same with the number of students we have in the hostel,” he said.

He said the management called the parents to appreciate them for their patience, understanding, and calmness and also solicit for their support in this trying moment.

He said they have informed the government about the matter and they have been assured that everything possible would be done to make sure the students are back.

ionigeria.com had reported how bandits stormed the boarding school located along Kaduna-Kachia highway and abducted the students.

Two soldiers were said to have been killed in an exchange of gunfire with the bandits.