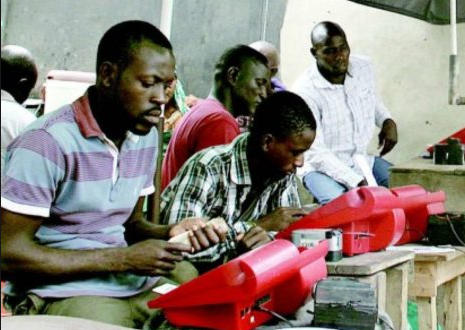 A 41-year old Ebenezer Olabusu has landed in trouble after he took his friends to a popular hotel, bought drinks worth about N71,000 with the hope that he will win premier lottery a.k.a Baba Ijebu but failed to win.

The incident happened at White Corner Hotel located at Rasmon Street, Ajao Estate where he went with his friend to drink.

It was gathered that Olabusu was handed a sure bet number that will likely win for the week’s lottery as he was convinced by some of the agents. He then went to the hotel, bought drinks and waited for the time the results will be announced.

However, when the results were finally announced, he did not win a dime. His condition became worse because he played the lottery on credit and at the same time was owing the hotel bill. It was learnt that when the hotel management realised that Olabusu’s hope was dashed as he failed to win, both the lotto agent and hotel management demanded for their money and he was unable to pay.

He was handed over to the police at Ajao Division where he explained what happened. Police sources said that Olabusu admitted that he was owing saying that his expectations failed after he was convinced by his friend to play the lotto.

He was charged before Isolo Magistrates court for obtaining under false pretence and stealing.

The prosecutor, Inspector Rita Momah did not object his bail condition but asked the court for a short adjournment for trial.

The Presiding Magistrate, Mrs. E. Kubenje granted Olabusu bail in the sum of N50,000 with one surety in like sum.

He was remanded in prison custody pending when he will perfect the bail condition.