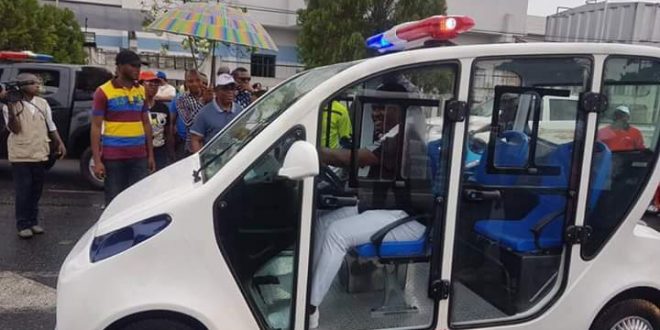 Cross River Governor, Senator Ben Ayade yesterday turned up in a special golf kart for the second dry run of the 2017 Carnival Calabar.

Revellers who were tired of waiting almost two hours for the flag off which was delayed due to a heavy downpour were awoken when Mr. Ayade drove to the flag off point at 11-11 roundabout where he said the vehicle was so that he could see all that was going on around him and to tell a new story.

“I am trying to articulate a new story that the carnival is not just about dance and costumes. It is actually an interpretation of the theme as we are adding value to Africa.

“Each band is going to interpret the agony and sorrow that comes with migration,” Ayade told journalists and hoped that those intending to leave Africa for the western world will watch and learn.

“As they watch this and see the agony of trying to migrate, they begin to learn and realise that over there is not green. Indeed Africa is richer than any part of the world,” Ayade said and added that: “I am proud that I am African.”

His deputy, Professor Ivara Esu who flagged off the dry run just like the first, said that it is expected that the third will be bigger and said the theme for this year’s edition was really for Africa.

“We expect this second dry run to better than the first one. We expect greater participation, we expect people to open their eyes and learn against the third dry run that will come so that they will perform very well at the main event.

“Cross River is a brand and Calabar Carnival is now internationally acclaimed and anybody who misses from being here for the Carnival in December has missed a lot.

“It is really for Africa, this year we are focusing on migration and you better come and learn a lot of lessons for especially those who don’t know what is awaiting them when they want to cross over, when they want to die in the desert, die in the Mediterranean sea and so on.

“And then, when those who even succeed to cross over, they live under subhuman conditions and are treated like slaves,” he said.

Meanwhile, there was a minor pandemonium when Mr. Ayade’s special golf kart seized on the road but was up and running shortly after.