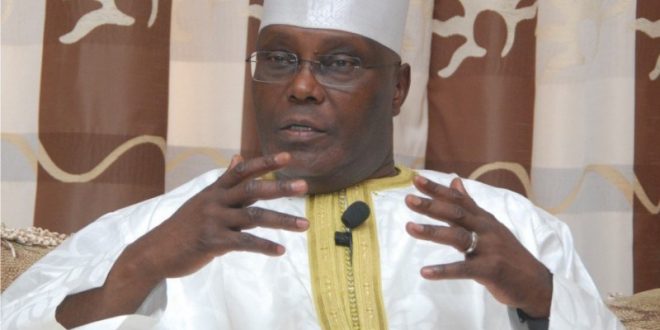 Party leaders from the Southeast and Southwest are worried over the tenure framework in the document tagged People’s Policy” of the candidate of Peoples Democratic Party (PDP), Alhaji Atiku Abubakar.

The policy is for launch on Monday less than 24 hours after President Muhammadu Buhari launched his, Next Level.

The policy plan of the 72-year-old Abubakar extended beyond four years, an indication that he is planning for a second term in office.

This has caused anxiety in the party because the policy plan extended to six years instead of four.

Instead of planning for a single term of four years, Atiku’s targets have a six-year timeline, fueling speculations that he might be hoping for two terms in office, the Nation reports.

According to a PDP governor, who spoke in confidence with The Nation, the “policy is causing some disquiet because it does not give a ray of hope that power will shift from the North to the South in 2023 if Atiku is elected as the nation’s president in 2019.

“Some of us were expecting a timeline of 2019 to 2023 but the policy plan is mostly made up of a six-year plan.

“The people of the South-East, South-West and South-South want a commitment from Atiku on whether or not he will spend one term in office in order to complete the slot of the North.

“We are suspecting that those who drafted the policy have a hidden agenda of two terms in office for Atiku.”

“I think our candidate is planning for the future for the country. It may not be a matter of second term ambition,’’ a member of the National Working Committee of the party said.

“Atiku has not really been categorical on whether or not he will spend one term in office. So, those raising dust on 2025 policy plan are getting agitated to know where he stands.”