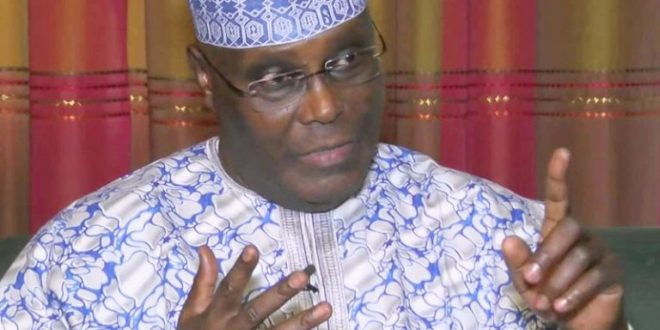 Former Vice President, Atiku Abubakar, has slammed President Muhammadu Buhari’s administration over what he alleged as his dismal performance in office and for dividing the country along ethnic and religious lines.

The assertions were made in his resignation letter from the All Progressives Congress, APC.

This came as the former vice-president, ahead of his imminent return to the Peoples Democratic Party, PDP, over the weekend, won the endorsement of the North-East caucus of the party to return to the party.

Meanwhile, contrary to the statement of the APC that it was unaware of the resignation of Atiku from the party, Vanguard gathered that Atiku resigned from the party more than a month ago.

The resignation letter, dated October 18, 2017, was channelled through his ward chairman in Jada 1 Ward, in Jada Local Government Area of Adamawa Sate.

In the letter, Atiku said his decision to quit the ruling party was not about him but about the future of the country as a democratic entity.

He said: “I wish to inform you of my decision to resign my membership of the All Progressives Congress, APC, in this ward with effect from the date of this letter.

“I am resigning from a party we formed and worked so hard, with fellow compatriots across the country, to place in government.

“I had hope that the APC government will make improvements to the lives of our people and the continued existence and development of Nigeria as one indivisible nation. This hope has now been dashed.

“I am unable to reconcile myself with the dismal performance of the party in government, especially in relation to the continued polarization of our people along ethnic and religious lines, which is threatening our unity more than any other time in the recent past and the unbeatable hardship that our people are currently undergoing.

“As I said in 2006, it is the struggle for democracy, constitutionalism and service to my country and my people that are driving my choice. Let me emphasize again that this is not about me. We have to have a country before people can aspire to lead it.

“While wishing you well, let me express the hope that in the near future, a substantial number of you will join forces with us to once again defeat impunity and restore vision and purpose to the politics of our great country.

“Please accept the assurances of my highest regard.”

Meanwhile, Atiku has continued to consolidate his grounds in the North-East sequel to what promises to be a tough presidential primary in the party, with some of the presidential aspirants in the PDP that have declared or are yet to declare their aspirations.

On his arrival in Yola, Adamawa State, last Friday, the former vice-president met with the state executive and some local government chairmen of the PDP, during which he intimated them of his resignation from the APC.

A source privy to the meeting told Vanguard that he won the support and encouragement of the PDP chieftains who noted his leading role in bringing the party to the state.

Atiku at the onset of the Fourth Republic, won the governorship election in Adamawa State in 1999 but side-stepped the office to run with Chief Olusegun Obasanjo on PDP ticket.

Following his meeting with the Adamawa State exco, the former vice-president on Saturday met with all six state chairmen of the PDP in Yola.

Also present at the meeting was the PDP national vice-chairman, North-East, Ambassador Emmanuel Njwah, during which they were said to have also encouraged him on his imminent return.

The former vice-president, according to sources, is following a script that would lead to his registration in the PDP in his ward preparatory to his presence at the party’s national convention on December 9.

Previous Road Safety Officer Crushed To Death By Reckless Driver
Next Selling Of Nigerians In Libya: Ministry Of Foreign Affairs