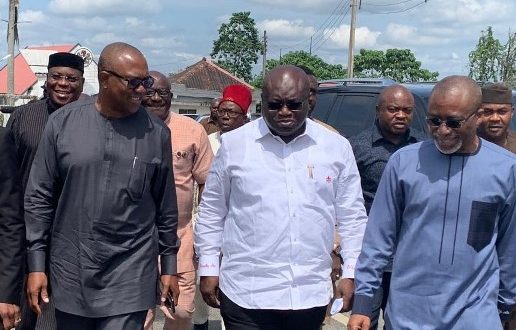 The money was donated on behalf of the Atiku Campaign Organisation.

The Waziri Adamawa also commiserated with the people and government of the State over the fatal pipeline explosion.

A delegation led by the Vice Presidential candidate of the PDP and former Anambra State Governor, Mr. Peter Obi, on behalf of Atiku Abubakar on Wednesday visited the affected communities.

He was accompanied by Abia State governor, Dr. Okezie Ikpeazu, and other officials of the state.

According to Obi, the news of the fire disaster is very devastating and it is particularly touching that so many lives were lost to the incident.

Obi said that the incident should raise the red flag for proper safety measures along all pipeline beds across the country.

The Speaker, Abia House of Assembly, Mr Chikwendu Kalu, had earlier said that the State Government would probe the Oct. 12 oil pipeline explosion that claimed some lives and property in the state.

Reports said that no fewer than 24 persons were confirmed dead in at Umuaduru and Umuimo villages in the area.

The speaker also commiserated with those that lost their loved ones in the fire and promised that government would initiate necessary measures to forestall a recurrence.